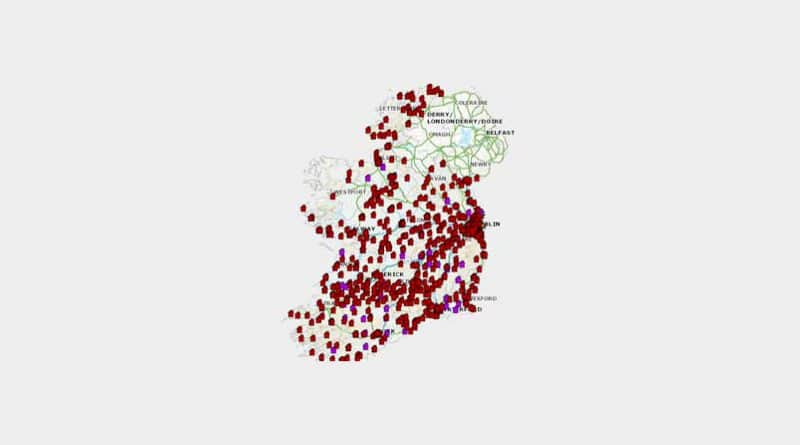 An online Housing Land Map has been launched by Housing Minister Simon Coveney as a key part of the Rebuilding Ireland initiative.

The map is the result of the collation of data by the Department of Housing, Planning, Community and Local Government from local authorities, the Housing Agency, and other State and Semi-State bodies. The data sets being released today include details of over 700 local authority and Housing Agency owned sites totalling some 1,700 hectares, as well as 30 sites (200 hectares) owned by State or Semi-State Bodies, the latter in the Greater Dublin Area and other major urban centres.

The map also shows the locations of 144 active sites, encompassing some 5,200 new dwellings which are under construction in the Dublin region.

Speaking at the launch of the map, the Minister said, “For the first time, we have a central database of land available for housing. This map represents both the opportunity to deliver housing and also the granular data on active delivery from sites around the country.”

The Minister commended both South Dublin County Council and Dublin City Council for their proactive approach in bringing forward four key sites that will deliver up to 3,000 much-needed social and affordable homes.

“I want all local authorities to take up the mantle and to bring forward sites as quickly as possible for development in this way,” The Minister said. “Opening up State land for mixed-tenure housing is a major policy intervention: if others control scarcity in terms of land supply, they control the market. I want the State to ensure that does not happen.”

Rebuilding Ireland has committed a €200 million Local Infrastructure Housing Activation Fund (LIHAF) to open up lands for early development, greatly enhancing existing measures in relation to construction growth, with a guarantee to double the completion level of additional homes in the next four years to 25,000 on average per annum. 47,000 social housing units are also to be delivered under Rebuilding Ireland’s plan by 2021.