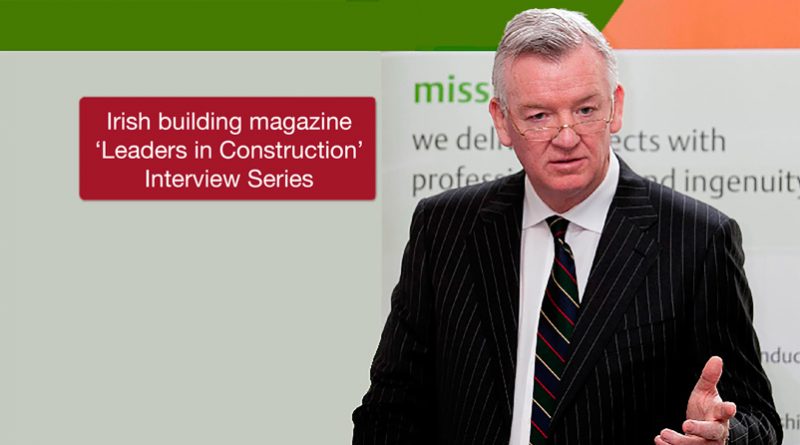 A Reputation For Excellence

As the holding entity for all of BAM’s Irish operating companies, BAM Ireland covers the entire spectrum of construction activity. Over the years, BAM has solidified a reputation in the Irish construction sector for undertaking and delivering challenging, complex, and iconic projects. This reputation has allowed BAM to become one of Ireland’s leading construction firms with turnover for 2015 in excess €390 million. BAM is managed by Irish professionals and employs over 2000 people directly and indirectly across the country.

While BAM is active across Ireland and covers all sectors – particularly the FDI sector – commercial, office, and retail building have increasingly been at the heart of our business, says Theo Cullinane, CEO of BAM Ireland. “Our most recent year-end results showed that we increased revenue from private sector contracts by 34%.”

Cullinane points to landmark projects as an example of BAM working as a market leader: “A significant landmark for us was the completion of City Gate Park in Mahon, Co. Cork in 2012. At 30,000 sq metres, this was the largest office development to be built in Ireland during the recession. It’s now home to companies such as Dell, Qualcomm, and the solicitors RDJ.”

“The Corrib Tunnel Project has also been a source of great pride for us,” he continues, “The completion of the longest service tunnel in Europe was seen as a significant step towards “First Gas” from the Corrib Gas field, which is expected to provide up to 60% of Ireland’s energy needs at peak production.  BAM has been commended both nationally and internationally for the innovative and creative approaches which were used at every stage of the design and construction phases of the tunnel to minimise the environmental impact of this important project.”

Last year saw the completion of the N7 Newlands Cross & N11 Arklow to Rathnew PPP. The final phase of the €282 million project saw the replacement of the signalised junction at Newlands Cross with a grade separated junction and the construction a new flyover. Road users can now travel from the North to the South of Ireland without any traffic lights.

In a major boost to the Irish education infrastructure, BAM has also undertaken two major school projects on behalf of the Department of Education and Skills. The first of the projects, known as Schools Bundle 3, saw the delivery of eight brand new Irish schools on time and ahead of schedule in Wexford (Gorey), Waterford (Tramore), Galway (Doughiska), Westmeath (Athlone), Donegal (Letterkenny), Leitrim (Ballinamore), and Limerick (Doon). This project was awarded silver in the Best Completed Project category at the recent Partnership Awards, held in London. Following the completion of Schools Bundle 3, the National Development Finance Agency selected BAM to undertake Schools Bundle 4, which will see the delivery of four post primary schools on time and within budget this year.

In January, BAM reached financial close and turned the sod on the €230 million N25 New Ross Bypass PPP,” says Cullinane. “Design and enabling works are now underway on the project, which will support up to 2,100 jobs locally and across the country. We have also reached Financial Close with the Transport Infrastructure Ireland (TII) for the €350 million M11 Gorey to Enniscorthy PPP motorway project. BAM Ireland also finalised a €135 million deal with the National Development Finance Agency (NDFA) at the end of last year for the construction and refurbishment of seven landmark courthouses across Ireland.”

The commercial office building market has been strengthening over the last year. BAM has recently completed a significant new office development at One Albert Quay and commenced works on the Capitol Cinema site, both of which are in Cork and are joint developments with JCD. Additionally, works have commenced on One Molesworth Street for Green REIT and major progress has been made on the construction of a major office building for an international client at Sandyford.

What sectors have opened up for BAM recently? “We operate across the entire island of Ireland, and, in collaboration with other BAM operating companies, we are also involved strongly in the Middle East, Great Britain, and Europe.  Public projects form part of our core business and Public Private Partnership (PPP) is an important market for BAM too,” explains Cullinane. “While we continue to make a significant and lasting investment in the infrastructure of the country through PPP projects, a significant focus for us in recent years is to ensure that we also significantly grow our private sector business.  This is in line with our strategy, as experience in recent years has shown that the new forms of contract for public works in Ireland have proven adversarial rather than partnering in nature.“

Theo Cullinane says that it is important that every construction company learns from the past and ensures that the sector is managed in a responsible and sustainable fashion. “For BAM, sustainable practice in the market place is closely interlinked with environmental sustainability,” he states. “BAM has been able to grow its business significantly in recent years, because there is an increasingly widespread consciousness amongst industry leaders about the need to reduce their carbon footprint. We believe that environmental sustainability creates value for our business, improves efficiency, develops client and supply chain relationships, ensures that we attract and retain talent, and improves our decision-making processes.”

With experience and leadership, comes responsibility, according to Cullinane. “Our reputation in this area has certainly helped us to win contracts and create employment right across Ireland. Such expertise is sought after internationally, and we firmly believe that responsible business practices can help the Irish construction industry grow in a sustainable and organic fashion.”

Cullinane is certain that government investment is always going to be a crucial factor for the building sector. “The investment in the inter-urban road network in recent years represents a major success for the State; however, there is unquestionably more to be done and we look forward to the accelerated progress of vital projects such as the N7 Naas Road widening, the Dunkettle Roundabout upgrade, and the M28 Cork to Ringaskiddy Motorway scheme. The Government’s shelving of plans for the Cork-Limerick motorway was extremely disappointing for us. This would have cut 30 minutes from the commute time between Ireland’s second and third largest cities and, more importantly, would represent a safer gateway between the two hubs.”

The rewards for Ireland are obvious, he says. A developed road network will attract foreign direct investment, will improve trade links, and bring more tourists to the regions. Towns and businesses across Ireland are waiting for these projects to get the green light, he believes, and it is crucial that funding is put in place to further the development of these projects as a matter of urgency.

What does Theo Cullinane, as one of Ireland’s Leaders in Construction, hope for from the new Government? “Firstly, the appointment of Simon Coveney TD to the role of Minister for Housing is to be welcomed. The creation of this department is an acknowledgement by the new government that there is a significant problem in the housing sector. It is imperative that construction is placed higher on the national agenda. Given the right environment, the construction industry can deliver the infrastructure the country needs, react quickly to address the housing shortage issue, and also create countless jobs across Ireland.”

As always, health and safety is paramount at BAM Ireland: “We believe that it is absolutely imperative that we conduct our business in a safe, professional, and ethical manner. We continue to roll out our behavioural safety programme, Beyond Zero, which has seen over 700 staff including subcontractors attend workshops conducted by the Beyond Zero leadership team. This campaign complements Royal BAM Group’s ‘’Making BAM a Safer Place’’ campaign with its core pillars of Respect, Intervene and Comply. We now have achieved an incident frequency rate of zero for two years in a row, and our Safety Awareness Audit (SAA) performance continued to improve with a score of 80%.”

BAM is dedicated to exploring the latest construction technologies to generate cost savings for clients, promote environmental sustainability, and provide innovative solutions to old problems. It has adopted BIM as a “Lean Process” on all new BAM projects and tenders. On design build projects, each member of the design team uses the 3D models for efficient visualisation and analysis of the proposed designs. This increases efficiency in the design and construction processes, which drives sustainable project delivery. BAM is the world leader in the application BIM for FM technology (as acknowledged by Autodesk), which gives FM teams significantly better control of the client’s building. This allows the teams to reduce costs and disruption to ongoing business.

What does Theo Cullinane hope for BAM Ireland over the next five years? “BAM Ireland is currently developing its 2016-2020 strategic agenda, which will be informed by and complement the Royal BAM Group’s global strategy. This strategy will address matters such as client relationships, human capital, evolving technology and IT investment and project delivery efficiency. It will also, crucially, examine projects by type, scale, and scope, which will become central to our plans over the next five years.”