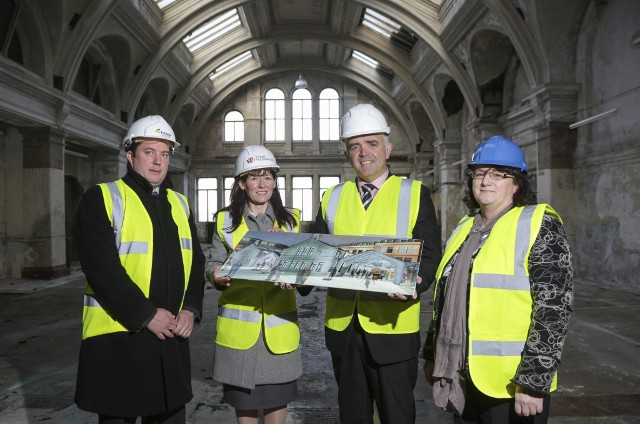 The iconic buildings, where RMS Titanic and 1,000 other ships were conceived and designed, will include a new boutique hotel and public heritage space.

The development of the four-storey, 84-bedroom hotel is being managed by Titanic Quarter Ltd.  It will be the world’s most authentic Titanic-themed hotel.

Titanic Foundation, with the help of a £4.9m grant from the Heritage Lottery Fund’s Heritage Enterprise programme, is supporting the restoration of the Drawing Offices.  The scheme, which will include three pavilions, will be publicly accessible for tours, events and exhibitions. Both projects are due to open in 2017, creating 100 new jobs.

Kerrie Sweeney, Chief Executive of Titanic Foundation, said: “The Harland & Wolff Drawing Offices are one of Northern Ireland’s most significant and important historical buildings.  It is a building of global significance where over 1,000 ships were designed including Titanic, Britannic and Olympic.  Today marks a key milestone in its long-awaited restoration.

“It’s almost 30-years since the Drawing Offices were used as a commercial premises, but now, thanks to the support from Heritage Lottery Fund and the partnership between ourselves and Titanic Quarter Ltd, we have the opportunity to bring them back to their former glory. This will give the public the opportunity to experience over a century of innovation and exceptional craftsmanship and allow the redevelopment of the rest of the building into a unique hotel.”

James Eyre, Titanic Quarter’s Commercial Director, added: “It’s been a long-term ambition of Titanic Quarter to fully restore Harland & Wolff’s former Headquarters and create a sustainable use for the building that will safeguard it for future generations. “Thanks to Titanic Foundation and the Heritage Lottery Fund we now have the opportunity to create an amazing building and something which we want to be the pride of Belfast.”

“The huge success of the nearby Titanic Belfast has already helped revolutionise Northern Ireland’s tourism offer.  The prospect of being able to stay and dine in the very rooms once paced by the Chairmen of Harland & Wolff will be an enormous pull for tourists from across the world and will be a major boost for Northern Ireland’s tourism industry.”

Enterprise, Trade and Investment Minister Jonathan Bell said: “It is exciting to see that one of Belfast’s most iconic buildings where men created, designed and built thousands of ships including the Titanic will be rejuvenated and returned to its former glory.  Northern Ireland’s tourism package is continually growing.

“Like that of Titanic Belfast which has become a ‘must see’ attraction for visitors to Belfast and Northern Ireland, I have no doubt that this project will be another great addition to our tourism offering.”

The boutique hotel will be operated by the same company behind Liverpool’s hugely successful Titanic Hotel in the city’s historic Stanley Dock area.  Since opening in 2014 the hotel has won many awards, including  winner of the ‘Luxury Hotel of the Year’ award at the 2016 Luxury Travel Guide Global Awards.

Paul Mullan, Head of the Heritage Lottery Fund (HLF) Northern Ireland, added: “These are exciting projects that will see one of Belfast’s most historic buildings reborn as a major tourist destination.  This, like many of the city’s historic buildings, has incredible potential to act as a driver of regeneration and economic growth.

“With Heritage Enterprise, HLF is helping to tap into that potential by covering the high costs of restoring vacant and underused heritage buildings – making them fit-for-purpose as commercial, and, therefore, sustainable spaces.”

As a listed building all redevelopment work will maintain the building’s character and appearance, and safeguard its special architectural interest.  Further details of how the new hotel will look will be released later in the year.

In its heyday Harland & Wolff’s headquarters accommodated 500 workers, including Thomas Andrews and Lord Pirrie who were part of the company’s famous management team.  Built in three stages between 1889 and 1922 it was partially restored in 2008 by Titanic Quarter Ltd for use as its HQ building and office space.