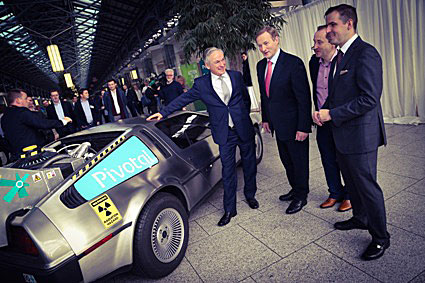 Pivotal®, the company accelerating digital transformation for enterprises, today announced the creation of 130 new jobs and an investment of approximately €100 million in Ireland over the next five years, rapidly expanding the company’s presence in the Irish market. Silicon Valley-head-quartered Pivotal is partially owned by EMC Corporation and VMware, Inc. with General Electric becoming an investor in May 2013.

The announcement is supported by the Department of Jobs, Enterprise and Innovation through IDA Ireland.

Pivotal’s investment marks a significant commitment to Ireland – one of the world’s most important technology hubs. This expansion by Pivotal is also an opportunity to further capitalise on the rapidly expanding talent pool of creative and digital expertise across the region, further expanding Pivotal’s presence in EMEA and supporting the local Irish economy.

Over the next five years, the approximate €100 million investment includes a new Pivotal Labs office in Dublin and the expansion of the company’s current operations in Cork; resulting in recruitment for full-time software engineering, technical support, operational and general and administrative roles. Initially, Pivotal will be based at DogPatch Labs.

Partnering with Pivotal, Ireland’s enterprise customers will start their digital transformation journey by building next-generation mobile and web applications. However, in order to transform traditional enterprises into modern software companies, Pivotal complements its Pivotal Labs software development capabilities with Pivotal Cloud Foundry, one of the fastest growing open cloud-native platforms in the industry, and Pivotal Big Data Suite, one of the most complete data platforms that extracts value from both fast and big data.

Pivotal’s CEO Rob Mee will be presenting a keynote session at the Web Summit, running from November 3rd-5th 2015 in Dublin.