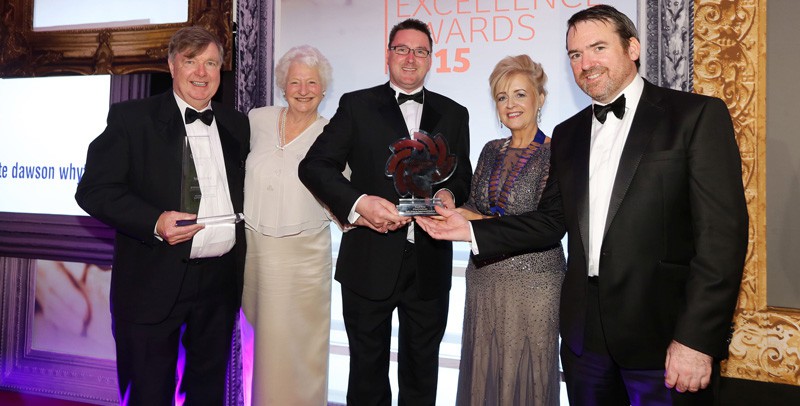 O’Hare & McGovern, the leading Northern Ireland construction company has been declared the overall winner of this year’s Construction Excellence Awards.

Managing director Eamon O’Hare and senior members of his management team received the top accolade in recognition of the firm’s work on the showpiece Wellcome-Wolfson Institute for Experimental Medicine building at Queen’s University, Belfast.

The £32m project which involved the development of a major energy saving scheme, took two years to complete and adjoins the neighbouring Cancer Research building at Jubilee Road.

He said: “It is an excellent example of how our local construction industry is pivotal to the development of so many important projects across a wide range of sectors in Northern Ireland each year.

“This particular project will benefit thousands of patients in the years to come, supporting the Wellcome-Wolfson Institute for Experimental Medicine in its mission to develop new avenues for the prevention, diagnosis and treatment of important ophthalmic and vascular diseases to relieve human suffering.”

Mr O’Hare, as well as his project manager, Seanie O’Hare, the contracts manager Martin Lennon, the design coordinator Eamon Laverty and Breda McAteer, the firm’s quality and environmental manager, received the award from Dame Mary Peters, the former Olympic champion who was guest of honour.

Mr O’Hare said the company had been winning quality and partnership awards with Queen’s University, Belfast, going back 25 years, but this one was particularly special.

He said: “This was an outstanding achievement by a special team of management and workers involved in a very special project. It required massive effort and total commitment. We are immensely proud of the building.”

The Newry based company which was established in 1972, is the construction division of Carnbane House Group employing 200 staff and 900 sub-contractors. Its interests include general contracting, house building, civil engineering, shop fitting, private development and public private partnerships.

The firm’s annual turn-over this year is at a record high and schemes currently underway include the redevelopment of Windsor Park in Belfast, the construction of a huge apartment block in West Hampstead, London and the building of a new secondary school in Edinburgh.