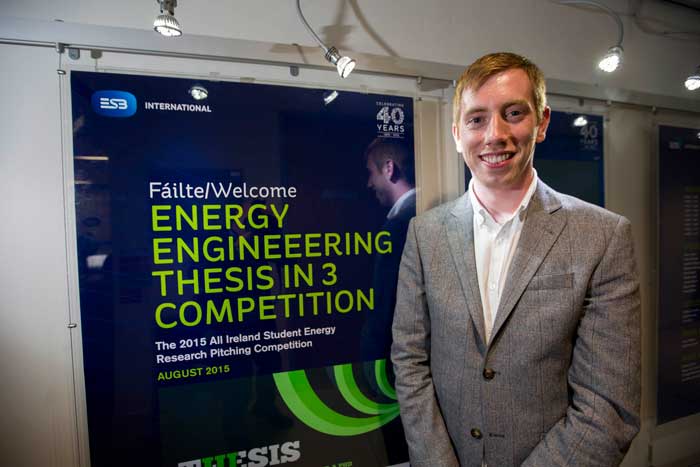 Joseph, who is conducting his PhD at the Energy, Power and Intelligent Control research group at QUB, will now go on to represent the energy sector at the Thesis in Three finals in Dublin.

Joseph won the judges’ prize from a field of 9 other candidates from UCD, UCC, QUB and ESB International. The competitors had to give a pitch of their research using only three slides in just three minutes, and were judged on the criteria of context, clarity and charisma. The expert judging panel consisted of Richard Crowley (EirGrid), Carol Murphy (ESB International) and Dr Lisa Ryan (UCD Energy Institute).

The pitches covered a range of topics including smart building data management, intelligent power electronic transformers, market analysis, energy systems integration, power system reserve, and reactive power control of wind farms. Jonathan Ruddy, PhD student at the UCD Energy Institute, won the audience choice prize. Jonathan’s presentation was on low frequency AC transmission for offshore wind farms. Jonathan used the analogy of how the speed of shaking a bottle of Coca-Cola is related to resulting level of fizz, as way to demonstrate the relationship between frequency and reactive power.

Joseph’s research “Gas Generation Dispatch Optimisation Considering Wind Forecast Error”, was titled “The Two Most Important Gases in Ireland” for the competition, looks at the impactof wind generation on gas-fired generation in Ireland. Panel judge, Dr Lisa Ryan, said of the competition: “The standard of the competition was very high, and we had a very difficult decision trying to award an overall winner.” Greg Hanna, Manager of ESB International’s Protection, Automation, Control and Telecoms Group said “ESB International were delighted to host this year’s Energy Thesis in Three competition. It’s an exciting format, and pushes researchers to present highly technical information in an engaging and understandable manner.”

Are we approaching the death of the kWh price?

The student research pitching competition was followed by a presentation by Dr Eamonn Lannoye of the Electric Power Research Institute (EPRI) on retail prices in Western USA, and a panel discussion on “the death of the kWh price? Disruption to the energy paradigm”.

Dr Owen Wilson, CEO of the Electricity Association of Ireland, and co-chair of the panel discussion, gave opening statements. He referenced the significant disruption to the energy market in Europe with low wholesale prices due to large penetration of renewables and behind-the-meter solar photovoltaic (PV) panels. Having both fixed costs, such as network and capacity charges, and the variable costs associated with fuel prices, being charged in a single kWh retail price, was highlighted as a challenge. Marguerite Sayers, managing director of ESB Networks, noted that this could result in cross-subsidisation between consumers. She highlighted the case of those who can’t afford self-generating technologies, such as solar panels and micro-combined heat and power units (u-CHP), paying the majority of the fixed costs for those who can, but still require the back-up capacity and networks from the system. Rodney Doyle, Director, Market Operations & General Manager, SEMO, spoke of the role demand side aggregators are currently playing in the market, and the huge potential for this role to increase.

Dr Fergal McNamara, senior energy advisor with the department of communications, energy and natural resources (DCENR), said that they were aware of the dynamically changing energy environment and its potential impacts, and that the department was both taking notes and closely monitoring the situation. Jonathan Jennings, Glen Dimplex, highlighted the huge benefits that technology innovation could bring, such as new developments in heat pumps, solar panels, and storage heaters, and that in the future, these technologies could be operated together to form a virtual distributed power plant.

Dr Muireann Lynch, post-doctoral fellow at the Economic and Social Research Institute, and co-chair of the panel discussion, aptly summarised the discussion: “There were areas of agreement and disagreement amongst the panel members and the audience, which facilitated a great debate. The death of the kWh price may be a natural consequence of the decarbonisation of the electricity system, but could also have far-reaching economic and social consequences. Ireland is and should remain at the forefront of this debate. Given the capital-intensive nature of the electricity industry, and the tendency for investment decisions to determine the future of the system for decades to come, it’s crucial that we continually debate the opportunities and threats associated with each new development.”

The UCD IEEE PES Student Branch would like to express their sincerest thanks and gratitude to ESB International for hosting the 2015 Energy Thesis in Three competition and the Death of the kWh Price panel discussion.