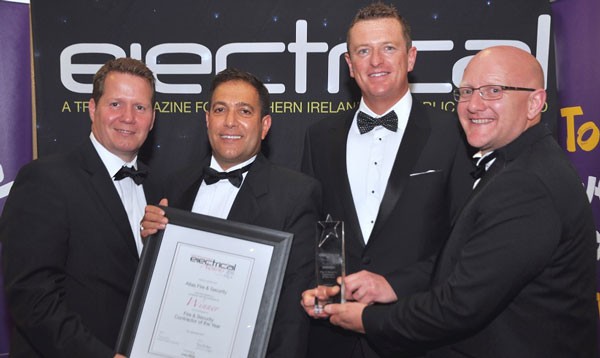 Now in their third year, the Northern Ireland Electrical awards celebrate excellence in the electrical industry and to showcase the very best work that is being carried out by the industry throughout the region.

Atlas Fire & Security designs, installs and maintains complete fire and security solutions, in addition to expanding specialisms in energy efficiency, audio visual and the health sector.
The company was singled out from the competition by a panel of leading industry professionals from the Northern Ireland electrical industry.

The judges described the company as a leading light in the industry, saying: “Atlas Fire & Security demonstrated outstanding ability on a difficult and complex project at Belfast City Hospital that was one of the biggest fire installations ever completed in Northern Ireland. This showed excellent organisation skills as well as extremely strong technical knowledge. A perfectly presented entry, combined with strong customer testimonials made Atlas Fire and Security a very deserving winner.”

Atlas collected the award at a high-profile, black tie ceremony hosted by broadcaster Lynda Bryans at the Hilton Hotel, Belfast in front of nearly 300 esteemed guests.

According to the Fire Industry Association, the UK fire protection industry is touted to be worth around £3 billion, representing an annual growth rate of around 4% a year over the last five years. This industry growth has fuelled Atlas Fire & Security’s success in Northern Ireland, with the company expanding in customer base and workforce.

Robert Creagmile, Sales and Marketing Director of Atlas Fire & Security, commented: “It is an absolute honour to win this prestigious award. Our company has been going from strength to strength with significant growth in recent years and it is fantastic to see hard work and investment pay off.”

“We have a rapidly growing customer base in both the public and commercial sectors across Northern Ireland and are making real in-roads into GB with growth focused on delivering superior customer service alongside market-leading products and services. Significantly, we are the leading independent, open protocol supplier and maintainer here which means our solutions are tailored exactly to our clients’ needs rather than being tied to a particular technology”, added Robert.

The Atlas workforce has grown almost three-fold in recent years from 16 employees in 2007 to 45 today, accompanied by a move to new state-of-the-art premises on the Crumlin Road in Belfast to facilitate growth. This year the local company also received the prestigious Investors in People accreditation is recognised as a mark of training and development excellence.

Major projects Atlas Fire & Security have completed include installation of one of the largest fire alarm networks in the UK at Belfast City Hospital, spearheaded by Managing Director John Nesbitt, who commented: “The project to replace the fire alarm system at Belfast City Hospital was very complex and it is one of the largest ever fire system installations in NI with over 15,000 devices. The turnaround time was extremely tight but it is down to the skill, commitment and hard work of our team that the project was delivered in a very tight timeframe and in one of the busiest hospitals in the UK.”