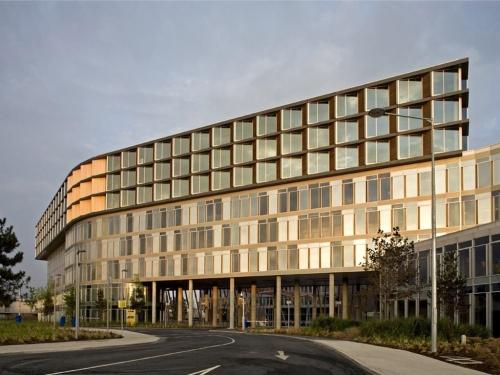 One of Dublin’s largest mixed use complexes, Elmpark, has been put up for sale with an asking price of over €185 million. Ms. Patricia Ward of DTZ Sherry FitzGerald and Mr. Fergus O’Farrell of Savills have been assigned to the sale.

Located on Merrion Road in Dublin 4, a section at the front of the development has been vacant since the time of its construction, although a large amount of the space is currently occupied by German insurance company Allianz and Novartis, a multinational pharmaceutical company.

The selling agents released a statement saying that an interested party looking to convert a building would benefit “from the current robust health of the Dublin office market with rising tenant demand, falling vacancy rates and rising rents”

The commercial element of the park is made up of three detached headquarter office buildings, a café/ restaurant and a créche. These have a collected floor space of around 400,000 sq. ft.

The sale will include 218 apartments and penthouses, which are currently let and with a rent role of almost €4m.

The former Bishop’s House to the front of the complex was converted into a successful restaurant.

The sale also includes a creche and eight newly-restored terraced houses at Llandaff Terrace fronting on to Merrion Road, which would attract significant rents in the current market.