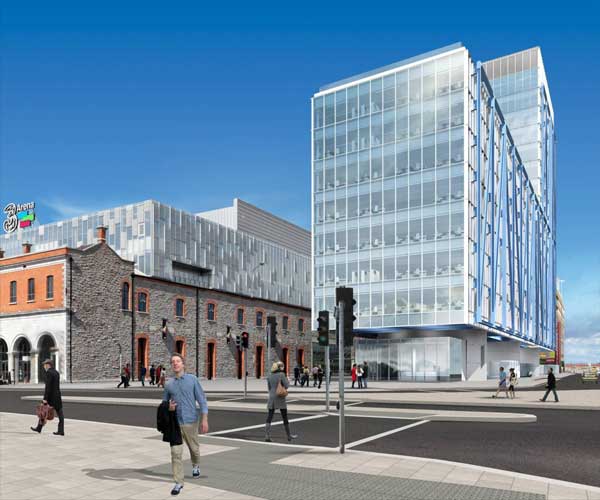 Receivers, Grant Thornton’s Stephen Tennant and Paul McCann have applied for planning permission on the site.

The plans will allow for 224,500 sq ft of office space. If the plans are signed off, construction will take about two years and should employ up to 350 people through the construction phase.

Grant Thornton’s Stephen Tennant commented on the project: “The Point Village has the potential to become Dublin’s newest commercial, entertainment and leisure hub.

“The economic downturn stalled its progress, but due to the strong demand for quality office and retail space in Dublin, it is now the opportune time to recommence development of a new commercial and entertainment hub.”

NAMA chief executive Brendan McDonagh added, that this is “part of the extensive land area within the SDZ connected with NAMA and we look forward to supporting further significant planning and development projects within the SDZ over the remainder of this year and into 2016.“

Roland O’Connell, Chairman, Savills Ireland and Mark Smyth, Senior Director, CBRE commented: “With renewed interest in the Docklands, both north and south, as a result of the new SDZ planning framework, planned new infrastructure in the shape of new footbridges linking the north and south dockland areas, and recent development and commercial activity, The Point Village has witnessed a significant increase in footfall over the past 18 months.”

Last month, An Bord Pleanála granted planning permission for the Alexandra Basin Redevelopment Project which will transform Dublin Port’s infrastructure, enabling cruise liners to berth at Alexandra Basin directly adjacent the Point Village. This will create a positive economic impact for the city – which has already seen the arrival of 91 cruise liners in the past 12 months – enhance inbound tourism and contribute to the development of Docklands.