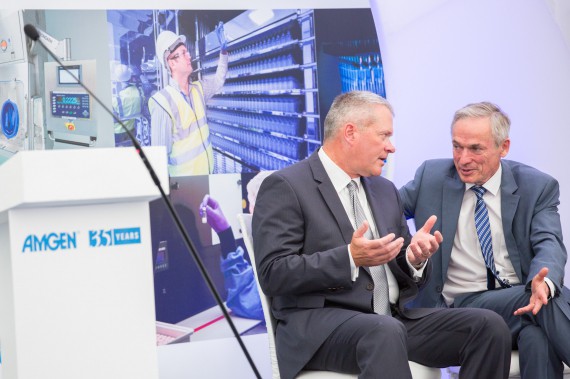 The development of the new facility included the construction of an 11,500 square metre production plant known as Production Module 3 (PM3), a new 5,800 square metre cold chain warehouse and major refurbishment of the other buildings which already existed on site. Additionally, the new syringe filling facility adds to the capabilities that already exist at the site and positions the Dublin plant as a key location within Amgen’s global organisation.

Work on the project, which was supported by the Department of Jobs through IDA Ireland, began in November 2011, creating over 500 construction jobs.

Speaking about the project, Minister for Jobs, Enterprise and Innovation, Richard Bruton TD said, “The story of this project encapsulates the recovery of the Irish economy. In 2010 the previous owner announced it was selling the Dun Laoghaire facility, with the loss of more than 200 jobs. However in the subsequent years Amgen announced that it was purchasing this facility, saving the existing jobs and creating 100 extra jobs. By investing millions of euros in innovation and in its workforce, and by bringing new product lines to Ireland, this Amgen facility provides a great example of how innovative companies can excel in this country. I am delighted that my Department and IDA were able to play a role in this project.”

Commenting on the official opening Martin Shanahan, CEO, IDA Ireland said, “As one of the world’s leading biotechnology companies, Amgen’s investment in Ireland is hugely significant to both the local economy and to Ireland’s reputation as a location of excellence for biotechnology investments.  The Irish facility plays a central role in Amgen’s global manufacturing footprint.”

Kerry Ingalls, Vice President with Amgen said, “We are very proud of the world class manufacturing capability our new facility brings to the Amgen network. Amgen’s innovative medicines have helped millions of patients around the world and our new facility will enable us to serve many more patients with grievous illnesses.”

We are very proud of the world class manufacturing capability our new facility brings to the Amgen network. Amgen’s innovative medicines have helped millions of patients around the world and our new facility will enable us to serve many more patients with grievous illnessesKerry Ingalls, Vice President with Amgen

“In Amgen Dun Laoghaire (ADL) I have seen what can be achieved when people with a passion come together to work on a shared vision. We have introduced four products to the site and delivered new capabilities to the Amgen network. We expect to continue to introduce further new products and the site will play an important role in helping Amgen deliver for every patient, every time. We are very positive about the future.”