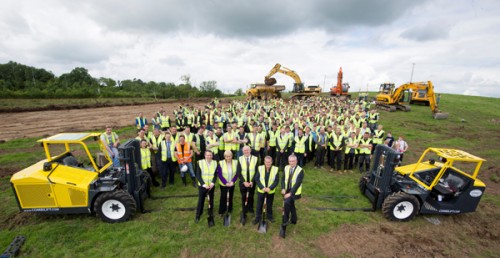 They were accompanied on this significant occasion by Minister for Arts, Heritage and the Gaeltacht, Heather Humphreys, Head of Industrial Products at Enterprise Ireland, Tom Kelly and Chief Executive of Monaghan County Council, Eugene Cummins as well as Combilift’s 350 staff.

Following an announcement in February, the sod turning formally marked the start of construction for a new purpose-built 46,000 square metre, greenfield manufacturing facility which will be built on 40 hectares of industrial zoned land on the Monaghan by-pass. The facility is larger than originally announced and the expansion will position Combilift to double its current €150 million turnover by 2020.

Construction has begun today to start levelling the site – a phase which is expected to last for 10 weeks. The overall project is expected to create 200 jobs during the 18 months construction period of with a further 200 jobs are set to be created in the next five years, mainly for skilled technicians and design engineers. In addition to the new on-site jobs, 21st September 2015 will see the first intake of students to the Assembly Technician Traineeship in the Monaghan Institute. Combilift are delighted to be a workplace partner for the traineeship. This traineeship together with a recently approved Apprenticeship for Original Equipment Manufacturers (OEM) Technicians, due to start next year, will ensure the supply of locally qualified staff.

The new multi-function facility will include a dedicated Research and Development building with adjoining administrational offices as well as state of the art manufacturing facilities which will include a purpose built testing area.

Commenting today, Martin McVicar said: “Combilift is delighted to break ground on our new facility, it shows our commitment to manufacturing in Monaghan as well as to the regional economy.”

Combilift is best known for its wide range of multi-directional forklifts, Aisle-Master articulated forklifts and other innovative material handling solutions such as the Combilift Straddle Carrier designed to handle large containers and over-sized loads. The company was set up by Martin McVicar and Robert Moffett in 1998 and thanks to the continued 7% investment of turnover in R&D, Combilift has produced in excess of 25,000 units since 1998. It currently employs over 350 people at its two facilities and products are exported to over 75 countries.