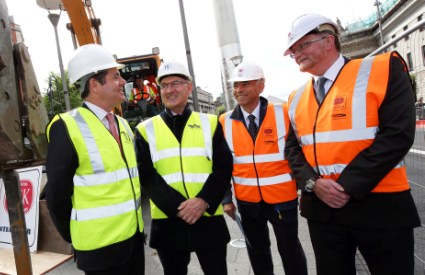 The main Luas Cross City track laying works have commenced, this element of the project is a major milestone in the €368 million project which will link the Luas Red and Green lines and deliver an additional 10 million journeys per annum when complete.

The contract for the main works, which follows earlier preliminary ones, encompasses all the civil engineering works required to prepare for the connection of the existing Luas Red and Green lines.

The works include:
· Track laying;
· Installing new paving, drainage and ducting along the alignment;
· The erection of Overhead Catenary System (OCS) poles and the fitting of building fixings;
· The building of new stops and extending of old to accommodate the future 53.5 metre trams;
· The construction of a new depot building, sanding shed and wash plant in Broombridge;
· The rebuilding of a railway line in Broadstone railway cutting.

Speaking at O’Connell Street today, Minister Donohoe said: ‘Since its inception in 2004, Luas has been a massive success. 2014 saw an additional 2.1 million journeys being taken between the Red and Green lines. The linking up of these two lines, through Luas Cross City, is expected to yield up to 10 million more journeys each year. This will create a Luas network for the first time which will add significantly to our public transport system’.

“I’m delighted to witness today the start of the main track laying works for Luas Cross City which represents the ‘missing link’ in the creation of a Luas network for Dublin. I am also very pleased that the project is expected to come in on time and within budget. While a project of this scale will inevitably involve some level of disruption, communication and co-operation between those responsible for the delivery of the project and stakeholders means that this is being kept to a minimum. I am confident that the collaboration so far can and will be maintained so that the city continues to function effectively and remains open for business. This project will be hugely beneficial for Dublin, adding significantly to our public transport system and will build on the success we have seen so far where the existing Red and Green Luas lines are concerned.”

Hugh Creegan, Director of Transport Investment, National Transport Authority, said: ‘We welcome this major milestone in the Luas Cross City project. Our team has been working alongside city traders, residents and citizens over the past 18 months to minimise disruption to people’s day-to-day lives while we build this significant transport project right through the heart of the city. There is no doubt that some disruption will occur while the construction is on-going, but with our commitment to open communications and to efficient project management we intend that the city will continue to function effectively around the works. The prize at the end – a substantially improved network of transport services across our entire capital region – will be worth it’.

Michael Nolan, Chief Executive of Transport Infrastructure Ireland (TII), the body responsible for the delivery of Luas Cross City, welcomed the commencement of the main infrastructure works, stating: ‘This marks another important milestone in the delivery of Luas Cross City. Over the coming months people will see the familiar Luas tracks being laid across the city centre in preparation for the commencement of services at the end of 2017. We would particularly like to thank the people and businesses of Dublin for their understanding during the construction period. Luas Cross City is a hugely important project, which will link the existing Luas lines and significantly enhance public transport in Dublin’.

Pat Lucey, Director at Sisk, said: ‘Sisk Steconfer JV is delighted to be involved in Luas Cross City, the biggest infrastructure project in Dublin for a number of years and one which will have a lasting impact. Building in the heart of Dublin brings its own challenges, but our experienced team is ready to deal with these and ensure the project is successfully delivered for the people of Dublin’.

The proposed route reinstates a transport corridor in the northwest of the city centre along the former Broadstone railway cutting and provides increased access to the communities of Phibsborough and Cabra as well as the DIT campus facility at Grangegorman.

Luas Cross City is designed to achieve greater penetration of the city area than currently exists, with frequent stop spacing, platforms integrated into the streetscape, and high quality access to the city centre. The provision of Luas Cross City is considered a critical element in reducing traffic congestion in Dublin city centre.

Luas Cross City also presents an opportunity to radically enhance Dublin city centre through attractive and sympathetic integration into the streetscape and revised traffic management with greater emphasis on sustainable transport. The contract, which is being delivered by Sisk Steconfer Joint Venture, is due to be completed in late 2017.