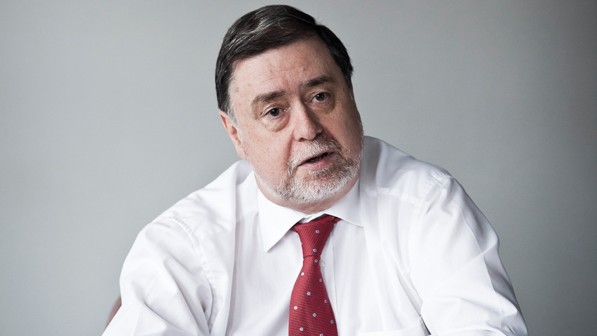 Following the release of the 2015 Bruce Shaw Handbook, Chairman Derry Scully talks about an industry in tentative recovery, the shortages in residential construction and the worrying lack of new blood coming into the sector.

A stalwart of the construction industry, each year the Bruce Shaw Handbook provides information on up-to-date construction data from around the world. Economic activity, indices of construction costs, trends in construction output and labour costs are examined in countries like the UK, the Middle East, India, Australia, the US and of course Ireland. Derry Scully is Chairman of Bruce Shaw whose clients currently include Apple, Microsoft, Hewlett Packard, KPMG, Arthur Cox, Primark, Kerry Group, National Children’s Hospital, St. Patrick’s College Drumcondra, New Park School, Amgen and Jazz Pharmaceuticals. In an interview with Irish Building Magazine, Derry pointed to an industry coming to terms with mistakes made in the past and the challenges currently facing it.

“Output is up; it rose to €11 billion in 2014 which is 7.1% of GNP. For 2015, we’re predicting approximately €12.5 billion. Obviously output is rising from an extremely low base and we’re still well below the sustainable level expected for a developed economy.” In 2007, the output of the Irish construction industry peaked at over €38 billion, representing almost 24% of GNP and employing 400,000 workers. “These were unsustainable numbers but the crash that followed was brutal and has left an industry with problems as it struggles to recover. Output bottomed out in 2012 at just over €9 billion, which was a staggering fall of 76%. A small recovery took place during 2013 and this accelerated in 2014 as mentioned above.”

Recovery in construction is following the increase in activity in the property market, an improvement that’s most apparent in the Greater Dublin Area. “You can see the recovery in Dublin at the moment with the amount of tower cranes and office development that’s going on. Property recovery has been slower outside of Dublin and as a recovery in construction always follows an increase in activity in the property market, construction outside of the capital is the same. But certainly, regions around the country will start to bounce back. It’s all supply and demand.”

According to Bruce Shaw, recovery has been led by expenditure on Foreign Direct Investment projects and by renewed activity in the commercial offices sector. Public sector expenditure has proceeded largely as planned and the government has announced a number of measures to stimulate activity. The government’s recent announcement that it plans to pump €300 million into a major social housing construction programme also spells good news for contractors around the country. Every local authority in the country will benefit from the new plan, with approximately 1,700 new homes set to be completed by 2017. An estimated 3000 additional jobs in construction will be created. There has also been increased activity as Irish Water rolled out its controversial water metering programme. Initiatives like these and pent-up demand will, says Derry, greatly aid the recovery of construction in Ireland.

In the commercial office sector, recovery is continuing in response to rapidly rising rental levels in Dublin. It’s expected that this will be assisted by a number of NAMA initiatives including Project Wave in the Dublin Docklands and the redevelopment of the Bolands Mills site in Barrow Street. “The IDA is attracting FDI companies to Ireland and high-tech industrial projects planned for the near future include more new data centres for major multi-nationals and a major redevelopment by Bristol-Meyers Squibb. FDI companies, particularly in the UK and the US, are sheltered at the moment due to the relative weakness of the Euro compared to the Dollar or Sterling. We need to maintain our competitiveness as we’re constantly being measured against the rest of the world.”

In 2007/2008, employment in the construction industry peaked at just under 260,000 and in 2012, it suffered a massive drop. “That’s rising again but very slowly; in the third quarter of 2014, numbers were only at 115,000. We expect this to rise in 2015 but we’ll still be massively down from peak figures which were unsustainable in terms of the volume of work and percentage of GNP.” The difficulty, says Derry, is that the industry has lost several key trades and skills. “People have gone abroad and they’re unlikely to want to come back. We’re experiencing a shortage particularly in glazing, curtain walling and specialist trades. Irish companies that are still operating are reluctant to grow too big for fear of getting hurt again. Some firms have gone to the wall with the demise of the large contractors and some of the companies who previously came into Ireland from the UK and Europe are reluctant to come over at the moment. That will be a constraint to the industry growing again and we’re seeing it right across all disciplines.”

According to Derry, a frightening number of engineering graduates will be coming out of third level education over the next few years. Apprenticeships are scarce and this is already having a detrimental effect on the sector. “Contractors couldn’t afford to take on apprentices over the past few years. Training people isn’t like turning on a tap; it takes five years to train an architect and four years to train other professionals. There’s also a concern in relation to numbers that went into colleges four years ago when construction was very much a dirty word. It will take a while for this much reduced intake to work through the system but it will have an effect.”

Construction prices remain an issue in the industry. “It’s important that we differentiate between prices and costs. Construction prices collapsed by more than 30% and they’ve only recently started to turn a corner. For 2015, we predict they will rise at 5% per annum and that’s what we’re predicting going forward. Against that, construction input costs and by that I mean labour and material costs, have stayed relatively constant. Trade union agreed labour rates fell by 7.5%, much less than what overall prices came down by.” Bruce Shaw’s research shows that, on average, tender prices rose by 5% during 2014 while, despite some variances on individual material costs, construction input costs rose on average by only 1%.

The price of materials is determined by global conditions while indigenous materials are no longer getting the economies of scale they would have had in the past. “They haven’t been able to reduce their prices by the same amount at all and that has led to the phenomenon of below cost tendering and all the difficulties associated with that. Several firms are no longer operating because of below cost tendering.” In 2009/2010, construction costs fell only slightly but construction prices dropped dramatically. “You would always expect prices to be above costs as firms have to make a profit. The indices would indicate that although prices are rising faster than costs, there is still a significant gap between the two, even in 2015.”

So things are starting to look up and there’s certainly movement within the industry, although it has yet to be felt outside the GDA. There are however a number of challenges and risks facing this tentative recovery. These include both global concerns such as instability in the Euro area and local issues, primarily around funding and skills shortages. “The public sector capital expenditure programme is a fraction of what is used to be. Recovery is simply not on the public sector side. Although the government is reasonably doing what they said they’d do, there is underspending on capital projects to allow more money for current expenditure. It’s also important to mention that not all the money in the public capital programme is spent on construction. In addition, we still have a major infrastructure deficit on the public sector side and not just in terms of roads but in relation to hospitals, schools, third level education and water schemes.” The increase in construction activity, witnessed particularly in the Greater Dublin Area during 2014, coupled with an increase in tender prices has given rise to new challenges when evaluating potential construction projects. “Firstly, it’s important once again to factor future construction inflation into feasibility studies and secondly, we are increasingly seeing a shortage of bidders for specialist packages, particularly curtain walling and glazing.”

Other changes which are set to have an impact on the industry include the Building Control (Amendment) Regulations, the intention of which is to increase the focus on inspection and develop a culture of compliance within the industry. The increased responsibility and change in risk-profile for owners, builders and design professionals under the regulations will most likely increase the cost of completing projects in both the public and private sectors. Increased costs will be in relation to insurance cover, additional design team fees in complying with the legislation, on-site programme implications and administration costs.

Provisions will need to be built into contracts to ensure builders comply with requirements under the regulations, including co-operation with the Assigned Certifier and provision of acceptable ancillary certificates. The certification process imposes challenging responsibilities on and additional liabilities for all parties involved in the process. It will certainly take time to settle and may involve modifications to the regulations over the coming years.

Recovery should, according to Bruce Shaw, be married with new innovative ways of working that will help to eliminate past mistakes. Recent examples of how our industry is changing and how we’re looking differently at the delivery of major capital projects is through the application of Lean Design and Construction as well as Integrated Project Delivery (IPD). Lean is a production based approach to project delivery and a new way to design and build capital facilities. It focuses on delivering precisely what the client and end-user want. According to Paul Boylan, Director at Bruce Shaw, its application requires a fresh approach in thinking about the complete process from design through to construction in order to remove waste, to create continuous flow and to radically enhance value to the customer. “It’s not about cost cutting, slashing prices, reducing staff or squeezing the supply chain. Lean is about identifying the process that delivers customer values and eliminates all non-value adding steps. It makes the remaining value adding steps flow without interruption and it allows the customer the flexibility to only make something when it’s needed.”

A practical example of lean in the field would involve the design team, main contractor and the subcontractors using BIM to identify and resolve clashes and other issues before construction. The sub-contractors are producing shop drawings by leveraging the 3D data to prefabricate system assemblies off-site. Off-site fabrication reduces material waste and transportation costs. Because they are able to fabricate off-site, sub-contractors can deliver material and systems on a just-in-time, -needed basis which allows for a more controlled and predictable installation process on-site.

In the same way, Integrated Project Delivery (IPD) is an approach advocated by Bruce Shaw that integrates people, systems, business structures and practices into a process that collaboratively harnesses the talents and insights of all participants. In this way, waste is reduced and efficiency is optimised through all phases of design, fabrication and construction. IPD can be applied to a variety of contractual arrangements and will usually include team members outside the traditional team of owner, architect and main contractor. According to Paul, Lean and IPD are two examples of how efficiencies and best practice from other industry can be transferred to the construction sector. “A number of major Irish construction projects have used Lean and IPD successfully in the last three years with many more planned for the years ahead.”

Derry believes there’s more confidence in the industry now. “After years of doom and gloom and construction being a nasty word, we see the potential for a vibrant industry that can input into the health of the country. I think it’s a sector that people want to get involved in again. Irish parents are encouraging their children to consider a career in construction and these are the people that will help deliver some of the infrastructure and buildings that we badly need.”