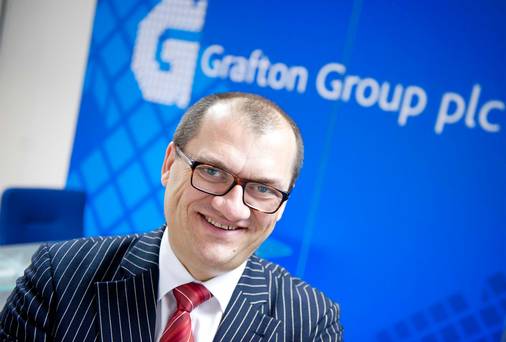 Grafton Group plc, the Irish builders merchanting and DIY Group with operations in the UK, Ireland and Belgium, has issued a trading Update for the six months of 2015.

Gavin Slark, Chief Executive Officer of Grafton Group plc commented: “The fundamental strengths of the Group’s strong brands and market positions together with the operational improvements made in recent years give us confidence that, despite current challenges, we can deliver the Group’s medium term targets outlined earlier this year.”

Merchanting accounts for 91% of Group Revenue, the company stated that, ‘The UK Merchanting business benefited from growth in average daily like-for-like revenue although markets remained competitive. Selco Builders Warehouse had an excellent half year as the leverage from increased revenue resulted in a significant improvement in performance. A new branch was opened in Redhill, Surrey in February and Selco’s 37th branch was recently opened in Coventry. Further store openings of this very successful trading format are scheduled for later this year and during 2016. The positive impact on trading from higher volumes in the traditional builders merchanting business was partially offset by a lower gross margin due to competition and mix changes. The performance of Plumbase was impacted by flat revenue and weaker pricing in a plumbing and heating market that continued to experience challenging trading conditions.’

Reporting on its Irish Merchanting operations the company stated that ‘business continued to perform ahead of improving trends as strong growth in the residential repair, maintenance and improvement (RMI) market was complemented by a modest recovery in housebuilding from low levels and increased activity in the non-residential and infrastructure markets.’