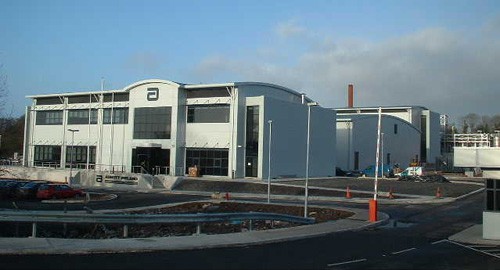 AbbVie (ABBV: NYSE) is creating 50 jobs and investing €40 million in expanding its development and manufacturing capacity at its Ballytivnan site in Sligo over the next four years. This is in addition to 75 jobs created at the site since AbbVie was launched in 2013.

The investment is supported by the Department of Jobs, Enterprise and Innovation through
IDA Ireland.

The company’s manufacturing site in Ballytivnan currently produces drug delivery devices, including a pen-style injector which is used by patients worldwide receiving an AbbVie treatment indicated for a range of auto-immune conditions.

AbbVie has a strong pipeline of specialty drugs and formulations, and the Ballytivnan site is poised to develop and manufacture a range of new medical delivery devices with this investment. The investment includes building expansion, facility upgrade and remodelling, and new manufacturing equipment to increase AbbVie’s drug delivery device capabilities.

Making the announcement Minister Bruton said: “Jobs are growing right across the country – but they are growing faster in some regions than in others. That is why we are developing jobs plans for every region of the country as a key part of our Action Plan for Jobs, and today’s announcement by AbbVie that it is creating 50 jobs in Sligo is a great example of what is possible in all parts of the country. AbbVie is a world-leading medical devices company, and the news that it is investing a further €40million in its Sligo facility and creating 50 extra jobs is a great boost for the North West. I wish Azita and her team every continued success with the operation in Sligo”.

Commenting on the announcement Azita Saleki-Gerhardt, AbbVie Senior Vice President, Operations, said: “We are pleased to be expanding AbbVie’s presence in our Ballytivnan site as a global center of excellence for delivery devices for our medicines. This investment reinforces our commitment to serving patients around the world, and it is a credit to the expertise of our team in Ireland.”

AbbVie is focused on delivering its small molecule and biologics pipeline to address significant unmet medical needs and advance the wellbeing of patients across the therapeutic areas of immunology, liver disease, oncology, neuroscience and kidney disease. The company’s unique offerings stem from its 125- year pharmaceutical development heritage combined with the innovative focus of a biotech.

The site employs a highly skilled workforce specializing in the disciplines of science and engineering, with 80 percent having a third level education qualification ranging from degree to Ph.D. level.

Welcoming the announcement, Martin Shanahan, CEO, IDA Ireland said: “The scale of investment is significant and bolsters the life science cluster in the North West region. The AbbVie site at Ballytivnan has contributed significantly to and leveraged the world class technical expertise that exists in the North West Region over many years. Collaborating with local Technical Service providers has been a win-win that has enabled AbbVie to deliver on their mandate and has in turn supported and developed service providers to the Medical Technologies sector.”

Together with this new development over €3.6bn investment has been announced for the biopharma industry in Ireland since 2012.

AbbVie’s presence in Ireland dates back to 1974. The company employs more than 500 personnel in Ireland, supporting commercial operations and general operations. This includes two pharmaceutical manufacturing sites, one in Carrigtwohill, County Cork and one at  Manorhamilton Road, Sligo (adjacent to Ballytivnan). In 2014, the company completed an €85m expansion of this site resulting in the creation of up to 175 highly skilled new jobs.  AbbVie was recognized as one of Ireland’s Best Workplaces in 2014 and 2015 by the Great Place to Work Institute. Each of the uniquely focused sites in Ireland manufactures portions of AbbVie’s top 20 products.