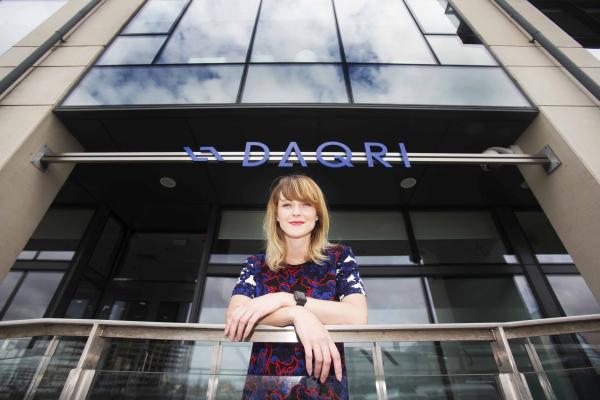 DAQRI the leading augmented reality/4D company, has announced the opening of its new European headquarters on Sir John Rogerson’s Quay in Dublin.

The venture was supported by the Department of Jobs, Enterprise & Innovation through IDA Ireland.  The company will hire 30 positions for its software and hardware development centre and will host a two-day Hackathon, #DublinHacks, –http://daqri.com/dublinhacks/ – at DCU Innovation Campus on Friday 19th and Saturday 20th June to activate the developer community around the DAQRI Smart Helmet.  It  is currently in the pilot phase of product rollout with customers in the fields of oil & gas, power & water, transportation, shipbuilding and aerospace.

“Ireland is highly regarded as a country for excellence in innovation and technology making it the perfect location for our first international office, in Dublin,” said Gaia Dempsey, co-founder and managing director, DAQRI International.  “We are thrilled with the quality of technical expertise we have found here and have been working closely with the academic community, researchers and research centres to define innovative R&D programmes.  Having strong interest from European customers in aerospace, energy, manufacturing and AEC sectors, including some based in Ireland, it made clear business sense to be based in Dublin.  It also marks a milestone in our company’s growth and strengthens our ability to serve our European clients.”

Speaking of the announcement, the  Minister for Jobs, Enterprise & Innovation, Richard Bruton TD stated, “A key part of the Action Plan for Jobs is seeking to attract the fastest-growing and most innovative tech companies in the world to make Ireland their home from early in their growth.  Today’s announcement that DAQRI, a hugely exciting company who were introduced to Ireland through the Web Summit, is making its first move outside the US to Dublin’s Docklands is a great boost.  I wish Gaia Dempsey and the team every success here.”

The hackathon, which is fully subscribed at over 100 attendees, will give participants the opportunity to hear internationally recognised hardware and software experts and compete to build apps for the industrial use cases the DAQRI Smart Helmet was made for.  Developers will have the unique opportunity to learn hands-on about the Smart Helmet’s sensors and development platform, as well as DAQRI’s authoring tools, to build apps for the ‘Future of Work’.  Powered by next generation computer vision, the Smart Helmet has an industrial grade IMU, 360 degree field of view via multiple navigation cameras, and thermal imaging and is controlled via gaze tracking and voice recognition.

Recognising how significant both the opening of the Dublin office and Hackathon is to DAQRI’s international expansion, its founder and CEO, Brian Mullins [@mrlaserbeam] is coming to Dublin on Friday 19th June to meet with and share learnings with Hackathon attendees and join fellow judges.  “We have been blown away with the calibre and deep technical talent by those who have registered, with some travelling from Scotland, Spain and Italy to participate,” he said.  Elaborating that, “It’s very exciting for us, both from a recruiting standpoint and because it’s seeding the developer community, a very important constituency for us.  We welcome independent developers, mobile shops, systems integrators, and more getting involved as we want to empower them to build apps on our platform.”

DCU Innovation Campus is home to Ireland’s first dedicated hackathon space and this is the sixth ‘Internet of Things’ related hackathon to take place there in the past year. Ronan Furlong, Executive Director said, “The mission of the Innovation Campus is to be a collaborative space where cutting edge companies can engage with their peers and the academic community in a commercial setting.  It’s fantastic to be hosting this event for DAQRI as DCU begins to explore how best we can support their innovation activity in Dublin.”