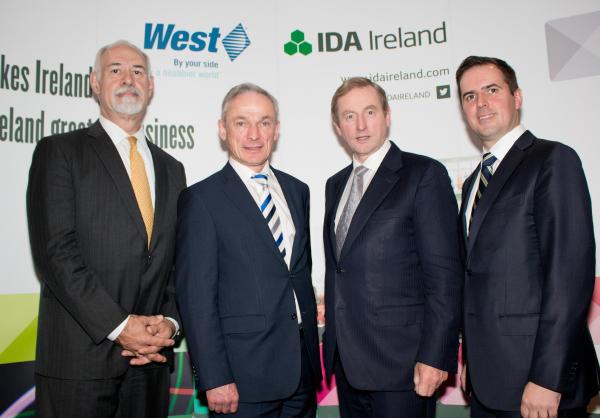 An Taoiseach Enda Kenny, together with Richard Bruton, Minister for Jobs, Enterprise & Innovation, have just announced that West Pharmaceutical Services, Inc. (NYSE: WST), a global leader in innovative solutions for injectable drug administration, plans to expand its global manufacturing operations to include a new site in Waterford, Ireland.

The new facility will produce packaging components for insulin injector cartridges and other high value packaging components, in order to meet growing demand from pharmaceutical and biotech customers. Once operational, this new site could bring approximately 150 new jobs to Waterford and is intended to grow to support additional jobs through expansions in the future.

“With diabetes emerging as one of the fastest growing diseases globally, our pharmaceutical customers are expanding their production lines for injectable insulin.  To meet this growing demand, we are announcing an expansion today that will help us address this need and continue to serve this critical patient population.”Donald E. Morel, Jr., West’s Chairman and Chief Executive Officer.

“In the future, we intend for this site to be a center of excellence for advanced packaging components to meet the needs of our customer base for a range of sophisticated injectable therapies.”

“Waterford, Ireland, is an ideal setting for this new plant, given its business-friendly environment and the growing health science industry in the area,” Morel added.  “On behalf of West’s Board of Directors, I would like to thank the many representatives of Waterford City, the Irish Government and the Irish Development Agency for their support.”

Construction is planned to begin in early 2015 on the 44-acre site at Knockhouse on Old Kilmeaden Road in Waterford, subject to the project obtaining requisite planning and zoning approvals, which the Company believes will occur later this year.  This site will be a center of excellence for West’s proprietary elastomeric  sheeting , which is used to package insulin for use in pen injectors. Future plans include additional manufacturing space for West’s proprietary injectable component product lines, which are integral to many injectable and dosage forms.  With these expansions, the plant eventually could accommodate between 250 to 300 jobs and involve an investment in the range of €100 million.

An Taoiseach Enda Kenny TD said: “I am delighted with this announcement of a new manufacturing facility in the South East by West Pharmaceutical Services which will create 100 construction jobs during its development and an initial 150 new jobs when operational. It is a massive boost for Waterford and the entire South East and I am happy that Government was able to assist through the work of the IDA. The Government is determined to secure economic recovery by incentivising job creation and further investment in the area.  Today’s announcement continues our strong track record on attracting employers in the medical devices sector and we will continue to prioritise Government support for sectors with real growth potential through our Action Plan for Jobs.”