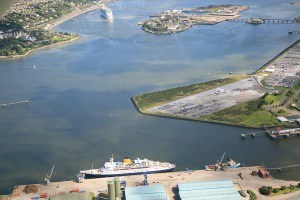 An Board Pleanála has just approved the planning application for the Ringaskiddy Port Redevelopment project, that will see €100 million be invested into the construction and redevelopment of the Port of Cork.

Since 2000, the Port of Cork has invested €72 million in improving Port infrastructure and facilities. Its prime location on the south coast of Ireland and its modern deepwater facilities, ensuring that the Port of Cork is ideally positioned for European trading and potentially for yet unexploited direct deep sea shipping services.

The network of advanced infrastructure already in place see annual traffic of approximately 10 million tonnes passing through the Port. This new construction phase will increase capacity for trade significantly, securing the Ports position as a vital link in the global shipping supply chain.

Conor O’Connell, Regional Director, Southern Branch CIF, warmly welcomed the new development:  “The Port of Cork sees vast amounts of trade taking place on a daily basis, which is vital not only to the economy here in Cork, but beyond this region as businesses throughout the country depend on its facilities as a gateway to their global supply chain”.

Its success is dependent upon a network of highly advanced infrastructure. The redevelopment proposals, which were approved by An Board Pleanala today will provide much needed jobs in the construction industry locally. This approval and the relocation of Port activities to Ringaskiddy should also act a positive catalyst for other construction projects in Cork” said Mr. O’Connell.