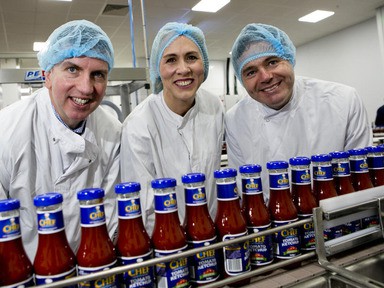 Minister for Transport, Tourism and Sport and Dublin Central Fine Gael TD, Paschal Donohoe, has opened the new production facility at Valeo Foods, who have completed a significant investment programme involving a €7 million upgrade of its Cabra manufacturing facility in Dublin.

The latest phase of the investment has seen the creation of a new state-of-the-art production line which, among other things, has resulted in the manufacturing, production and packaging of Chef sauces, and Fruitfield jams and marmalades, returning to Ireland.

This marks the biggest single investment in the site since it was established 70 years ago, and will see the creation of 40 new positions, bringing total employment at the Cabra facility to 150 people over the next 12 months.

Total production output from the Cabra facility will increase to approximately 85 million consumer packs produced annually as a result of the upgrade, placing it amongst the leading indigenous food manufacturing facilities in Ireland.

Minister Donohoe said: ‘This is a significant investment in the community creating much needed local employment. The Cabra manufacturing facility houses some of Ireland’s best-known brands and I am delighted to be a part of this official opening, which also marks the return of Chef Sauces and Fruitfield products which are once again being produced in Ireland. This company is going from strength to strength, with huge diversity in what it is producing. I look forward to more positive news from them in the years to come’.

Commenting on the investment, Chief Commercial Officer, Oliver Sutherland, Valeo Foods, said; ‘With the expansion and upgrading of our production facilities at Cabra we now have a best-in-class international site which meets the highest global food safety and quality standards. Through our continued focus on innovation and new product development, we look forward to growing our manufacturing output in Ireland and further supporting the local economy and Irish suppliers’.

Marking its return to Ireland, Chef has launched a new bespoke bottle design which will be rolled out across the entire Chef range including brown, ketchup, salad cream and bbq sauces.
The Cabra facility, which stretches over a 10 acre site, has been in operation in Ireland since 1945 and manufactures canned, culinary and home baking products under the market-leading and iconic Batchelors, Erin, Odlums and Shamrock brand names.

The ingredients used in the production of these products are sourced from 400 suppliers spread across 20 countries. These include 35 of Ireland’s leading pea farmers who supplied over 900 tonnes of peas in 2014 alone, representing 95% of all Irish grown peas bought by Irish consumers.