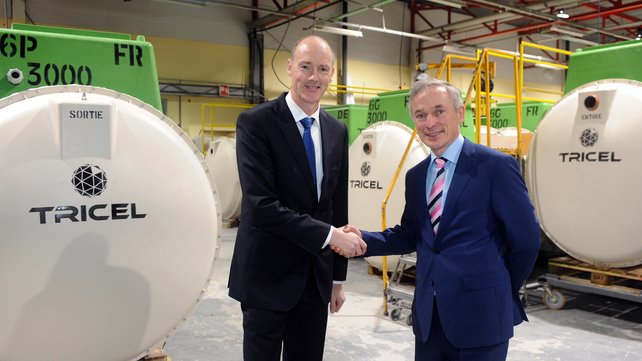 100 new jobs will be created by Killarney based manufacturing and engineering group Tricel with 40 of these to be situated in the company’s headquarters in Killarney.

The new jobs, including graduate positions, will bolster the existing workforce of 250 based in Ireland, UK and France over the next 18 months and will strengthen operations in management, engineering, R&D, product development, marketing and manufacturing. The 40 new jobs in the Killarney HQ will be worth an extra €2.4m to the local economy.

This project is supported by the Department of Jobs, Enterprise and Innovation through Enterprise Ireland.

Tricel is a European leader in the development and manufacture of advanced and specialised composite products from water storage tanks and wastewater treatment systems to construction and building products as well as specialist moulding and filler products for the manufacturing and automotive industries. The new jobs also mean that the company will invest in more resources to facilitate its expansion across the company and it is hoped that many of the new graduate positions could be filled from local third level colleges in the Munster region.

Originally known as Killarney Plastics which was founded in Killarney in 1973, Tricel also established further operations in UK in 1993 and in France in 2011 from where it won ‘Best Irish Company in France’ award in 2012. From 2010 to 2013 the company saw growth of 57% with an extra 75 jobs created then and has forecasted turnover to double in the next four years. This will be achieved by the continuing expansion into new markets and through the introduction of new and innovative products into recently newfound markets throughout Europe, Middle East, Australia and the American continents.

Making the announcement today Minister for Jobs, Enterprise and Innovation, Richard Bruton TD said: “Jobs are growing in every region of the country – however they are growing faster in some regions than in others. That is why at the heart of our Action Plan for Jobs is acclerating jobs growth in every region. Key to this is creating a powerful engine of Irish industry – companies like Tricel, operating in manufacturing and engineering sectors, often family owned, have huge capacity to drive employment growth in every town and village of the country. We have put in place a range of measures over the past four years to support the growth of companies like Tricel right around the country, and we have seen impressive employment growth in these companies. Today’s announcement that Tricel is creating an extra 100 jobs, of which 40 in Kerry, is a huge boost for Killarney and for the whole South West. I wish Mike and all the team every success with this project”.

Tricel Managing Director Mike Stack said: “Our main success and expansion was actually fuelled by the recession in Ireland which had a detrimental effect on our Irish market which forced us to increase focus on our existing UK market and also on further export markets. We bucked the trend and backed ourselves by making a multimillion euro investment in R&D and plant & machinery within this period. Amongst our biggest business achievements during this time was the fact in 2007 we exported 5% of our turnover and were highly dependent on the Irish construction market. By 2013 our exports had increased to 70% of our turnover. This investment has led to continuous process and design improvements which have ensured our current and future success. Being a privately family owned business we pride ourselves in supporting the local economy and where possible, local manufacturers and service providers are the preferred supplier choice. We’re very grateful for the assistance we’ve received from the Government through Enterprise Ireland which has really helped us grow our business and exports to help create these jobs”.

The Stack family were keen to point out that a game changer and turning point for the company was when they made the decision to enter the environmental market with a domestic waste water treatment system. As the success of this product became apparent in Ireland they made the decision to manufacture it in modular form which would allow it to be transported overseas at a competitive cost. This eventually led to the decision to assemble the product in their Gloucester factory to service the UK market and to open a purpose built assembly factory in France to service the French market.