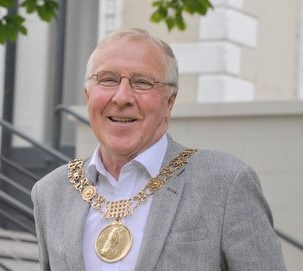 The scheme, Peadar Kearney House is located on the site of the old Liberty House on Railway Street, Dublin 1. Liberty House was closed for occupation  in 2012 after it was deemed unfit for modern living.

Over the past nine months, Circle Voluntary Housing Association (VHA) has managed the scheme.  The Association will now manage Peadar Kearney House on an ongoing basis.

The new scheme contains six three-bed homes, 34 two-bed homes, and 16 one-bed homes.  The development has been fully occupied since August 2014, with 21 of the current tenants having previously lived in Liberty House.

The scheme is also providing housing for families and individuals who were homeless and on housing waiting lists.

Commenting today, Justin O’Brien, Chief Executive of Circle VHA, said: “The current scale of social housing need is immense.  The volatility of the housing market over the past number of years has placed many impediments on the delivery of high-quality social housing.  To overcome this challenge, we need innovative funding solutions and we need to see all stakeholders – the Department, local authorities and voluntary housing associations – working in collaboration.

“The success of this regeneration project demonstrates what can be achieved through collaboration.  Circle VHA worked with Dublin City Council on this scheme for two years.  We are now proposing – with the Council – to develop the site adjacent to Peadar Kearney House, in order to provide an additional 40 new social housing units via the Capital Advance Leasing Facility and private funding.

At today’s launch, Minister Alan Kelly said: “I am particularly pleased to see that this development will be managed by Circle Housing Association on behalf of Dublin City Council.  Approved Housing Bodies, such as Circle Housing Association, play a key role not only in managing housing and related supports for vulnerable groups, but also in delivering new housing.  This housing association is among the many non-governmental organisations that are doing valuable work in challenging circumstances.”
Circle VHA is one of the largest approved housing bodies in Ireland, currently owning and managing nearly 1,000 units in the Dublin region.  Further information is available at: www.circlevha.ie