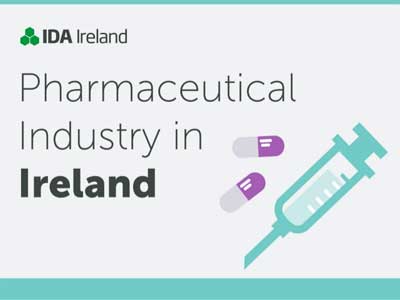 IDA Ireland has released a report which indicates that the pharma industry in Ireland has been boosted by a stream of significant new investments in recent years, particularly in the biopharmaceutical space and despite the very real impact of the patent cliff.

According to Matt Moran, director of Ibec group PharmaChemical Ireland, which represents the industry in Ireland, an estimated €3bn in capital expenditure is currently going into the ground in the sector here.

The statistics around Ireland’s pharma sector are impressive: nine of the world’s top 10 pharma companies have operations here; Ireland is the eighth largest producer and the fifth largest exporter of pharmaceuticals globally; 120 pharmaceutical companies have bases in this country; and 33 pharma and biopharma plants are FDA approved.

Pharma-chemical products make up half the total goods exported from Ireland making the sector critical from an external trade perspective. In 2013, the value of exports was just over €50bn, down by 8pc or around €5bn from the previous year. This followed a fall of under 2pc in 2012 over 2011 as the impacts of the cliff started to take hold – Ireland manufactures in part or full six of the top ten blockbusters drugs that have or will come off patent between 2011 and 2016.

“There was definitely a fall in exports driven by the patent cliff and related issues,” says Moran. “Another impact of the cliff and general over capacity in the sector has been a number of high-profile mergers which have undoubtedly had impact in this country with a number of high profile plant closures.

“Balanced against this has been a more or less continuous stream of new investments over the past couple of years. In the main these investments are in biopharmaceutical manufacturing, high end chemical synthesis or product and process development.”

And the fall in exports in the sector is starting to reverse, he says. “We’d be very positive that as a result of the new investments going in at the moment we’ll probably see an increase in exports taking place in the next couple of years.”

The current series of investments is expected to result in the creation of more than 2,000 new direct jobs in the sector. At the moment, pharma in Ireland employs around 25,000 people directly and another 25,000 indirectly. And they’re high quality jobs. “Over 65pc of those employed in the industry have a third-level qualification, so it’s important place of work for those who have graduated, especially in science, technology, engineering and maths (Stem) subjects,” says Moran.

The recent investments have come on the back of a strategic focus on the sector, particularly in the area of biopharmaceuticals.  “We had been lobbying very hard for investment, especially in biotech. I think we’ve probably been more successful than we even thought we would be in attracting investment – the Bristol-Myers Squibb investment [of over €700m] is an example of that.

“We really are on the map now as being a location for biologics manufacturing and that was the objective. We had also been pushing fairly hard for more investment in process development and product development and that certainly is happening. That helps to anchor the companies in Ireland and also helps to attract the new molecules.”

The investments fall into two main categories – expansions of existing operations by companies that have operated successfully in Ireland for some time and brand new greenfield sites by companies entering the country for the first time.

“The expansions tend to fall into two further categories – product or process development and advanced for biopharmaceutical manufacture,” says Moran.

Advanced manufacture includes high potency synthesis with options for continuous or plug and play operations such as the new synthesis plant recently opened by Pfizer at its Ringaskiddy facility. “This is actually a retrofit of an older phased out plant,” says Moran. “It’s an excellent example of a plant moving in tandem with cutting edge developments in the space at a global level.”

Elsewhere, Abbvie recently completed an €85m expansion at its pharmaceutical manufacturing facilities in Sligo. The company said the investment builds capability for existing products and potential therapies in its pipeline.

And Mylan is in the process of investing €75m a year over a five-year period to 2016 developing its pharmaceutical capabilities in Dublin and Galway. This includes funding for expanded R&D capabilities.

Growing the biopharma manufacturing base is also hugely important for the future of the industry. “It is vital that Ireland is a major player in this arena. The recent explosion of investment in this field in this country has pushed Ireland to second place behind the USA as a centre for the manufacture and development of such products,” Moran says.

Top of the list of that explosion of investment was the announcement in November 2014 that Bristol-Myers Squibb is planning to build a new state-of-the-art, large-scale biologics manufacturing facility at its Cruiserath site in Co Dublin that will produce multiple therapies for the company’s growing biologics portfolio. The 30,000-sq metre project will house six 15,000-litre bioreactors and a purification area as well as office and laboratory space. The plant will be built on the grounds of the company’s existing bulk pharmaceutical manufacturing plant. Bristol-Myers Squibb says it expects the investment to be around US$900m (€734m).

Other high profile and high value investments in this space include Eli Lilly’s €330m spend on a second biomanufacturing facility at its Kinsale campus. ”What makes the Eli Lilly investment even more interesting is that fact that it is co-located with existing chemical manufacture, making this site unique in Ireland and Europe,” says Moran. “Eli Lilly continues to invest in product and process development at the Co Cork site, making it a living example of the development plus manufacturing strategy espoused in the PharmaChemical Ireland series of strategic plans.”

Allergan, meanwhile, is spending US$350m on a new biologics facility in Westport. The investment will enable the company to expand the manufacturing capacity for Botox and develop a manufacturing base for the next generation of biologic products currently in the Allergan pipeline.

Pfizer is investing €145m at its Grange Castle biotechnology manufacturing site in Dublin that will enable it to introduce two new processing suites and expand current production and product testing capabilities. Pfizer’s Grange Castle facility is one of the largest biotech manufacturing sites in the world and currently produces two of the company’s blockbuster medicines – Enbrel and Prevenar 13.

Elsewhere, MSD at Brinny, Genzyme-Sanofi in Waterford and Amgen in Dublin are all continuing to invest in their biotech operations.

Making up the rest of the capital being invested are a number of companies that are new to Ireland. These are generally emerging biotech companies tending to specialise in the rare or orphan disease space – similar to Genzyme, which established in Ireland a number of years ago, says Moran.

“These are very high value products aimed at diseases of unmet therapeutic need in the main,” he says. “The value of these products means that they can achieve blockbuster or close to blockbuster status relatively quickly and from a national perspective can replace revenues lost as a result of the patent cliff.”

A good example of these companies that are relatively new to Ireland is Alexion, which has embarked on a three-phase investment here. Earlier this year, it revealed it was acquiring part of the part of the original Elan plant in Athlone to establish aseptic filling operations in the country. The company is also investing €75m in two locations in Dublin that will house its new global supply chain facility, as well as warehousing, laboratory and packaging operations. Alexion plans to employ 300 people in Ireland by 2016.

In Limerick, meanwhile, Regeneron is investing €240m in a state-of-the art, biopharmaceutical production facility within an 11.88 hectare site, previously owned by Dell in the Raheen Business Park, Limerick. The investment programme will involve the refurbishment of existing buildings on the site and the construction of a quality control laboratory to transform the site into a world-class biopharmaceutical campus. Up to 300 people are expected to be employed at the facility by the end of 2016.

Elsewhere, Biomarin has bought Pfizer’s biologics manufacturing facility in Shanbally, Co Cork. California-based Biomarin focuses on the treatment of rare diseases and has a number of new product candidates in late development. It’s the first time the company has placed internal biopharmaceutical production activities outside of the US.

And Jazz Pharmaceuticals is currently in the process of constructing a €50m, 5,100 sq metre manufacturing and development facility in Athlone. Particularly notable is the fact that it’s the company’s first ever construction of a manufacturing facility anywhere in the world.

Ireland’s pharma sector remains strong and the country continues to be a location of choice for the launch of new products, says Moran. “There has been a patent cliff impact but we’ve had a strategic response and that seems to be paying dividends at the moment.”