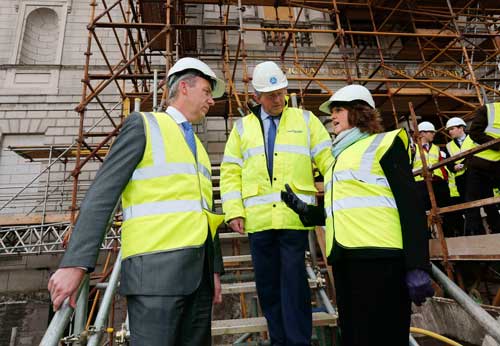 A new campaign aimed at helping unemployed construction workers regain employment in the sector has been jointly launched by the Department of Social Protection and the Construction Industry Federation (CIF).

It comes as the latest Live Register figures published by the Central Statistics Office today show the standardised unemployment rate at 10%, its lowest level since January 2009. The campaign aims to raise awareness throughout the construction industry about the many Department of Social Protection services being provided to businesses to support their employment needs, and to connect them with the many talented and experienced workers who are currently seeking employment.

The latest figures show there are a total of 116,700 people working in construction throughout the country.  Employment in the construction industry grew by a total of 13,100 in 2014. This meant construction was responsible for 45% of the additional jobs created throughout the economy last year.  With the sector now expected to enter a period of sustained growth, the hope is that construction companies will start taking on employees who have been long term unemployed.

Former construction workers continue to make up the largest segment of unemployed people in Ireland.  At present there are approximately 80,000 jobseekers from the construction industry on the Live Register*, 66% of whom have been unemployed for 1 year or longer.

The campaign will see extensive information about the employment services provided by the Department communicated to construction companies and contractors throughout Ireland.

The aim is to ensure employers throughout the construction industry are aware of the many programmes available to assist them when hiring new employees.  These include:

All of the services provided are available at no cost to employers.

Speaking about the campaign, Tánaiste and Minister for Social Protection, Joan Burton T.D. said: “No sector saw the stark realities of the crash more clearly than construction. Restoring the sector to health will create a virtuous circle, whereby construction companies get the finance they need to build, construction workers are reemployed, and they build the homes that families need. Both my Department and the Government at large are working hard with the Construction Industry Federation to make that a reality. A key step in this process is ensuring industry employers are fully aware of the supports available from the Department. We can connect employers with skilled workers. But we can also do much more than that. Through JobsPlus, for example, we can help with wage costs, an invaluable support for companies.”**

CIF Director General Tom Parlon outlined the CIF’s involvement in the campaign.  “Unfortunately there continues to be far too many former construction workers on the Live Register.  Some of these people have been out of work for several years, given the severe difficulties the industry went through.  Now that our sector is starting to recover, we want to help do something about this problem and to help some of these people secure jobs.

“The CIF is delighted to be working with the Department of Social Protection to help highlight the many different services and schemes that are available to construction businesses who wish to hire from the ranks of the unemployed.  The CIF has a strong reach throughout the industry and we will be making that available to help generate greater awareness of the services provided by the Department.  We believe that this campaign will not only help those who are out of work, but it will also strongly benefit construction companies and contractors throughout the sector, as well as the wider economy,” Mr. Parlon concluded.

John Paul Construction who won the award for the National Gallery of Ireland project commenced work on the site in January 2014 and they are due to complete their work in January 2016.  There are over 120 workers employed on site at present and it is expected to increase significantly over the next four to six months.

The campaign will see materials provided by the Department of Social Protection on their many employment supports communicated by the CIF through briefings, mailings, leaflets, videos, blogs, social media, a dedicated section being established on the CIF website and other channels. www.cif.ie