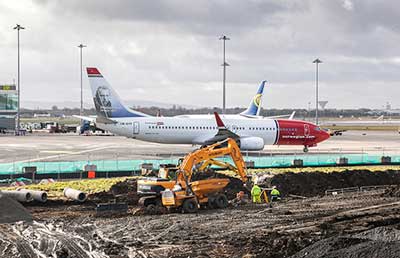 The €20 million project, which is located to the northern end of the airfield, is the largest single capital investment at Dublin Airport since the opening of Terminal 2 in 2010.

The extra aircraft parking spaces are required due to the significant growth in traffic at Dublin Airport over the past three years. Passenger numbers at the airport increased by 8% to 21.7 million last year and have risen by 16% since 2011.

“This is a major construction project, which will create 10 extra aircraft parking stands and help the airport expand further over the medium term,” said Dublin Airport Managing Director Vincent Harrison. “We are constantly investing to maintain and improve the airfield area for our airline customers and also to improve and upgrade the passenger experience throughout the airport,” Mr Harrison added.

The new apron area being developed covers about 67,500 square metres, which is equivalent in size to 15 football pitches or a space big enough to park 900 cars. The first phase of the project, which is currently underway, involves two months of earth moving and drainage work after which contractors will begin laying the concrete that forms the top layer of the new parking area.

The parking stand project also includes the replacement and upgrading of drainage infrastructure, and the provision of underground surface water attenuation and storage. These environmental measures will ensure that all surface water run-off from the new parking stands will be collected and released in a controlled and carefully managed way back into the local water system. “We take our environmental responsibilities very seriously and this project will be delivered to the highest environmental standards,” Mr Harrison said.

The construction work is being carried out by Clare Civil Engineering, which will have up to 30 construction staff on site at any one time. The project, which is known as Apron 5G, is due to be completed in April 2016, and also includes additional high mast lighting and a new electrical substation.

Dublin Airport is expecting another year of passenger growth in 2015, with 20 new services already announced for this year. The new services include; Los Angeles, and Addis Ababa with Ethiopian Airlines,  Washington DC, Nantes and Newquay with Aer Lingus, Copenhagen and Lublin with Ryanair, Helsinki with Finnair, Paris Orly with transavia.com, Barcelona with Vueling, Reykjavik with WOW Air and Halifax, Nova Scotia with Europe Airpost.