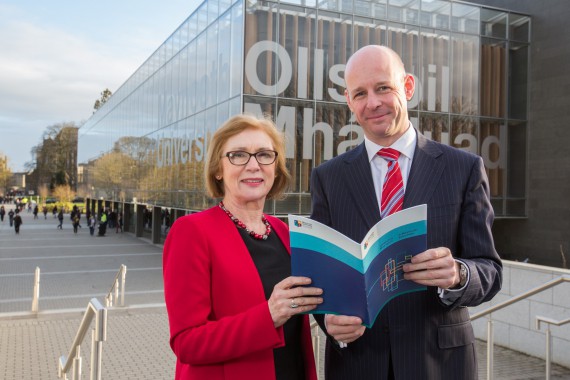 The Minister for Education and Skills Jan O’Sullivan TD has launched a new undergraduate curriculum at Maynooth University.

The Minister was joined by Maynooth University President, Professor Philip Nolan, in launching the University’s new undergraduate curriculum, a model unlike any other in the Irish university sector.

The University is also making it easier for students to combine subjects across the arts and sciences. The new curriculum, which will be phased in between 2015 and 2017, will be partially facilitated by a significantly reduced number of entry routes-from 50 to approximately 20. These broader entry routes will greatly simplify the CAO process for students, while giving them more time to make the best decisions for the future.

The Minister for Education Jan O’Sullivan TD praised the University for its innovation saying: “Ireland has a very strong reputation internationally for the quality of our graduates and our third level education. However, the modern world requires constant innovation to ensure we continue to protect and enhance our global standing and Maynooth’s is a bold move that addresses learning and development, student welfare and employer needs. In prioritising critical thought and analytical skills the academic team at Maynooth have rightly identified a major new focus for learning.”

Furthermore, IBEC head of education policy, Tony Donohoe, also welcomed the new curriculum changes, saying industry would benefit from the approach to third level that Maynooth University is taking, “Quality graduates are important for Ireland’s competitiveness, our ability to attract top class foreign investment and the development of strong indigenous companies. Business wants young people who can be leaders, self-starters, display flexibility of thought and the ability to work in teams. Maynooth’s new curriculum will help deliver in these vital areas and is an important contribution to the national offering.”