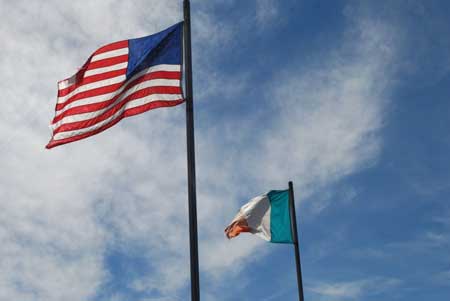 Ireland is now the number one destination in the world for US foreign direct investment (FDI), according to a new report commissioned by the American Chamber of Commerce Ireland. The Irish-US Economic Relationship 2015 researched and written by Wall Street Economist Joseph Quinlan, has was launched today by Minister for Foreign Affairs & Trade, Charles Flanagan, TD.

Welcoming the American Chamber of Commerce Ireland report, Minister Flanagan said: “This report demonstrates the enormous vitality and strength of the Irish-US economic relationship and the close affinity between our people which, combined with the right policies and the rich talent pool we offer, has helped bring 130,000 jobs to Ireland. The report also indicates a bright future ahead with many US companies planning to grow their operations here; this is welcome news at a time where the latest figures show unemployment down for the 39th consecutive month in a row.

As a Government, job creation is at the core of our work and we have placed huge emphasis on high priority established markets such as the USA. This month, I, the Taoiseach, Tánaiste and five more of my Ministerial colleagues will be travelling to the US for St Patrick’s Day and every one of us will have trade promotion events as a key part of our programmes. This Government will continue to work to bring the Irish-US economic relationship to the next level by ensuring the conditions for future growth are in place in Ireland and in promoting Ireland as a great place to do business.”

The report highlights the key elements of the Irish-US economic relationship including:

Eamonn Sinnott, President of the American Chamber of Commerce Ireland said “This report tells the story of how the Irish US economic relationship has gone from strength-to-strength in recent years. It has been and will continue to be a significant bright spot in our economy. Today there are 130,000 people employed by the 700 U.S. companies in Ireland. The stock of investment by US companies in the Irish economy now stands at over $240 billion. Thankfully investment is continuing with 140 new investments announced last year, 60 of which were from companies investing in Ireland for the first time.”

The two-way nature of the Irish US economic relationship was also welcomed byEamonn Sinnott, “The huge scale of US investment into this economy couldn’t possibly be matched in the other direction, however it is positive to note that Irish investment into the US remains substantial. Irish companies have invested over $26 billion in the US and these businesses generate an impressive $62 billion in annual sales.”

The report’s author Joseph Quinlan predicts Ireland will continue to benefit from the strength of this relationship concluding “The critical task in front of Ireland is ensuring its place in the high-end, value-added chain of multinationals, notably in services and evolving technologies that will change the nature of work and production. The race to remain globally competitive never ends. Unlike many nations in Europe, Ireland understands this dynamic all too well. Rising to the challenge is something Ireland excels at, with the nation’s economic rebound in the past year just one more piece of evidence of Ireland’s dynamic economic character. The Irish-US economic relationship is expected to remain robust and mutually beneficial.”

Eamonn Sinnott singled out Ireland’s workforce as the country’s unique selling point stating “Ireland’s true success story is talent and it is talent that will drive our growth in the future. That Ireland is a top destination for US FDI is a testament to the hard work, ingenuity and productivity of the generations of people who have worked in US companies in Ireland and have made them so successful on a global scale. In winning these investments we get the chance to operate on a global stage and have the opportunity to make many great things happen- and that is something which is large part due to the talent that we have to offer as a nation.”