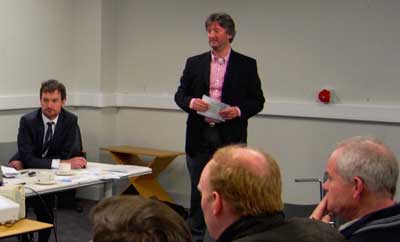 Over 60 people attended the Passive House briefing event in Cork on Thursday 19th of February.

Marc O’Riain, lecturer and researcher from CIT welcomed the Association to CIT and gave an overview of the work done in Cork Institute of Technology, paying particular attention to low-energy buildings.

Paul McNally gave an excellent presentation on the construction of the third non-domestic certified passivhaus building in Ireland, a pharmacy which was built in Clonmel and that received its certification two weeks ago.

This was followed by another architect’s perspective on passivhaus, and examples of passive house buildings in Cork. John Morehead gave the presentation that not only covered examples, but also went into a number of specifics involving both climate data and construction details.

Then, an industry professional, Tom O’Dwyer from Siga, spoke about the importance of airtightness, and methods of achieving airtightness, providing highly relevant examples to the audience of how to do it (and how not to do it!).

The final presentation of the evening was given by Stephen Spillane of Eco Timber Frame. His presentation covered passivhaus from the perspective of a builder. A key aspect of his talk was that related to costings, and from his perspective, there was no extra cost associated with building a passivhaus compared to a standard house.

The evening wrapped up with a highly interactive question and answer session, and John Morehead undertook to drive the establishment of the Cork Passive Houses Association of Ireland chapter. www.phai.ie