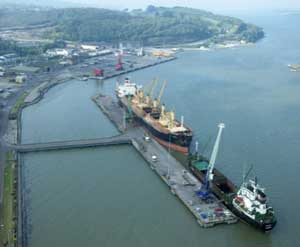 Launched by Minister for Transport and Tourism Paschal Donohoe, the programme is the implementation of the first key element of the port company’s masterplan, Vision 2041, which is aimed at transforming the Shannon Estuary into a major national and international economic hub.
Today’s announcement will see SFPC commence a seven year programme in quayside infrastructure development with a €12.5million investment in infilling of 3.45 acres on the port’s East Jetty, with work beginning this month.

Preliminary works for Phase II – connecting the East and West jetties – have already commenced, with the third phase, the reclamation of a further 2 hectares, to commence on the completion of phase II. All three phases will add over 35,000m2 and additional berthage when completed.
The new open quay storage area on the east-jetty will enable the company berth 40,000 ton vessels directly alongside the quay, leading to faster turnaround times for customers and, in turn, creating significant opportunities for growing cargo handling on the jetty in line with those projected in Vision 2041.
The masterplan is focussed on unlocking the enormous potential of the Shannon Estuary arising from its unrivalled depths and resultant unique advantage of being the only natural watercourse in Ireland capable of handling the world’s largest vessels. It envisages the creation of up to 3,000 jobs over the next 25 years on the estuary by capitalizing on these natural water depths.

SFPC already currently helps to facilitate international trade valued at over €6bn per annum through its six port facilities on the estuary.
The infill programme first phase will require 65,000m3 of infill and will be completed in 12 months. The contract for the East Jetty expansion has been awarded to Kilrush, Co. Clare based civil LMN Keating.

Funding for the €50m capital investment programme is already in place, the majority from SFPC’s own reserves with some external finance.
Together with the planned private sector investment at the Foynes Port complex – €26m alone this year –the overall investment already confirmed for Foynes over the period of this investment program is a minimum of €75m. The private investment includes the 142 job CPL investment in a biomass plant at Foynes and the 40,000sq ft storage facility being developed by Argosea.