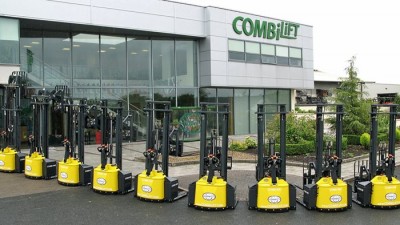 An Taoiseach Enda Kenny TD and the Minister for Jobs, Enterprise and Innovation Richard Bruton TD today (Friday 6 February 2015) announced the creation of 200 new jobs over the next five years by Combilift as part of a €40 million investment by the company over the next two years in building a new, state-of-the-art, greenfield manufacturing site.

The majority of the 200 jobs to be created in the next five years will be for skilled technicians and design engineers. A further 200 jobs will be created during the two year construction period of the new facility.  This investment programme has been supported by the Department of Jobs, Enterprise and Innovation through Enterprise Ireland and will position Combilift to double its current €150 million turnover over the next five years.

The company currently employs over 300 people between its current facilities in Monaghan town and in Clontibret.

Combilift has recently purchased 40 hectares of industrial zoned land on the Monaghan by-pass with plans to invest €40 million in building a purpose-built, 40,000 square meter, greenfield global HQ and manufacturing facility with a devoted Research & Development building and adjoining back office facilities.

Combilift is best known for its wide range of multi-directional forklifts, Aisle-Master articulated forklifts and other innovative material handling solutions such as the Combilift Straddle Carrier, designed to handle large containers and over-sized loads. The

company was set up by Managing Director Martin Mc Vicar and Technical Director Robert Moffett in 1998 and thanks to the continued 7% investment of turnover in R&D they export innovative products to over 75 countries.

Welcoming the announcement, An Taoiseach Enda Kenny said: “Supporting recovery in the regions is behind this fantastic announcement today of an additional 200 jobs in Combilift and a further 200 construction related jobs.  It is growing and dynamic Irish companies like Combilift which are driving a recovery across Ireland’s regions.  Combilift’s new €40 million facility in Monaghan will make a profound difference to the local economy and the national export economy.  These new jobs will have a deeply positive impact on those who get back to work or take up new opportunities, but they also have a knock-on economic benefit for local businesses, shops, restaurants, tradespeople and service providers.  This is part of the Government’s plan to secure economic recovery and see it spread to every part of the country”.