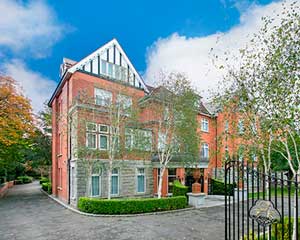 31-33 Merrion Road – once home to the British Embassy in Dublin and then converted into 38 apartments in Dublin’s Ballsbridge are being brought to the market by international real estate advisor, Savills, with asking prices starting at €615,000.

The development comprises of three blocks, containing 50 exceptionally spacious one and two bed apartments, ranging from 1,021 sq. ft. to 1,684 sq. ft. in size. 12 of the apartments are in private ownership.

Malton House is the oldest block within this historical development. Constructed is the late 1800s and later acquired by the British government, it became home to the British Embassy in Ireland. In the late 90s, the building was converted into a luxurious contemporary apartment block. Two additional blocks – Grafton House and Linden House – were constructed alongside Malton House at the same time.

The apartments – all of which are set amongst peaceful, mature and well-manicured gardens – feature en-suite bedrooms, utility rooms and guest bathrooms. Period features and ceiling heights have been preserved to their original condition. Car parking is included with all units with over half benefitting from two spaces. The development also includes a concierge service attending to a wide-range of owners’ requirements.

David Browne, Head of New Homes at Savills Ireland says that 31-33 Merrion Road is the most exclusive residential development to ever come to the market in Ireland:

“Given the location, the quality of the build and the fact that this is a 100% residential scheme, we believe it is Ireland’s finest development. It will appeal to a wide-variety of buyers, including people looking to trade down, ex-pats planning on returning home and individual investors looking to take advantage of Dublin’s attractive rental market. With the euro continuing to weaken against the pound, we expect there to be significant interest from UK buyers.”

Ballsbridge is situated within close proximity to the city centre – just a ten minute walk – and is in the heart of the ’embassy belt’, where over 30 foreign embassies are based. It is also home to the Royal Dublin Society (RDS), Dublin’s largest exhibition and conference centre and location of the Leinster rugby team’s home ground. The surrounding area is abuzz with restaurants, pubs and coffee shops and is well serviced by public transport options including bus and rail services.