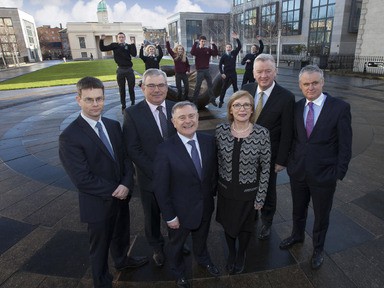 Building has commenced this week on four new post-primary schools under Schools Bundle 4 of the Government’s Public Private Partnership (PPP) Programme. The schools and sports pitches will be built by BAM on greenfield sites.

The announcement was made in by the Minister for Education and Skills, Jan O’Sullivan TD, and Minister for Public Expenditure and Reform, Brendan Howlin, TD at an event to mark the signing of an agreement that was also attended by Theo Cullinane, CEO of BAM Group Ireland, AIB Director of Personal and Business Banking, Bernard Byrne and Garret Tynan from KfW IPEX-Bank.

An estimated 720 jobs will be generated during the construction phase of the schools which will range in size from 6,500 to 10,000 square metres.

The new school buildings are:

The contract with BAM Group Ireland for this project entails designing, building, financing, operating and maintaining the educational facilities involved. The cost is spread over a 25 year period through annual inflation-linked payments, the first of which will be made following completion of the first school building in 2016. Annual payments are expected to be approximately €7m.

Minister O’Sullivan said: “I am delighted to see the beginning of construction of almost 3,000 new school places. The students of these four schools will benefit from the opportunity to learn in new and improved teaching spaces and modern educational facilities built to a very high standard. These school places are expected to be available from the middle of 2016. The timely progression of this project has been made possible by the hard work and dedication of the National Development Finance Agency (NDFA) and my own Department and the cooperation of all the other stakeholders in the project.’’

Minister Howlin said: “This project follows the successful financial close of two other PPP projects in 2014.  I am especially pleased to see the increased competition to fund our PPPs experienced in this case, and I congratulate AIB and KfW IPEX-Bank on their success in co-funding this education project.”

BAM Group Ireland’s CEO Theo Cullinane said: “BAM is pleased to once again invest equity in Ireland’s educational infrastructure and to partner with the Department of Education and Skills and the NDFA on this significant project. We successfully delivered eight schools under Schools Bundle 3 and look forward to providing four state-of-the-art, energy efficient schools under this project. The PPP model remains one of the most effective ways for Government to ensure that our infrastructural development maintains momentum and that employment within the construction sector receives a much needed stimulus.”

The partners also highlighted the fact that Irish professional firms were used in the design of the schools, creating Irish jobs for engineers and architects.  Three Irish engineering companies and three Irish architectural practices were involved in the project. For more information visit: http://www.bamcontractors.ie/