Thirty million euros is to be spent on rebuilding part of Letterkenny General Hospital following serious flooding at the end of July.

The accident and emergency department at the Donegal hospital was closed for weeks after a tributary of the River Swilly overflowed.

The estimated cost of the rebuilding work is 10m euros.

However, the total for re-equipping the facility and rebuilding sections of the hospital is estimated at €30 euros.

It is understand insurance will cover the bulk of the repairs.

General manager Sean Murphy, said: “Over 40% of floor space was lost at one stage and about 70% of our overall functionality was lost. 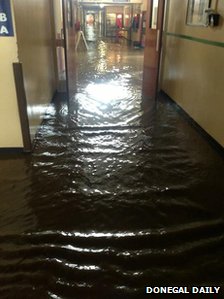 “I’m delighted at how hard the team has worked because, at the time, it was terribly devastating.

“There is a lot of work to do but I’m not sure that it could run into much more than 30m euros.

“Some of the equipment has been taken away for decontamination.”

Eleven key areas of the hospital have to be rebuilt including radiology and outpatient departments, coronary care and oncology, but the priority is to get the emergency department back in operation by February 2014, along with the hospital’s kitchens.

The rest of the work should be completed by autumn 2014.

Mr Murphy said that the temporary emergency department which was opened three weeks after the flood is functioning and is capable of dealing with a major emergency.

He said there would be greater links with Altnagelvin in future, especially in the field of radiology. Source: BBC News