Cork-based contractor Donban has won one of the most prestigious building conversion jobs in the City of London.

The firm has won the main contract to convert 10 Trinty Square, former home of the Port of London Authority, into a luxury hotel and spa.

The grand building in a prime location overlooking the Tower of London and the River Thames will also boast 37 serviced luxury flats on the upper floors. Formerly the Port of London HQ, the grade II listed building and site were acquired in 2010 by Singapore-based KOP Properties and has since worked with architect Woods Bagot to draw up plans to restore the building to its former glory. 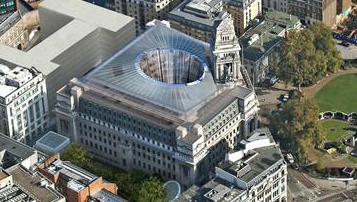 The conversion job of the Grade II-listed building includes erecting a new glazed roofing structure above the building and its grand central courtyard.

Donban, which is presently on site carrying out soft strip demolition, is expected to move onto the construction phase within weeks.

The firm has worked in the UK on several hotel jobs and specialises in pods through its sister company Vision Modular Systems.